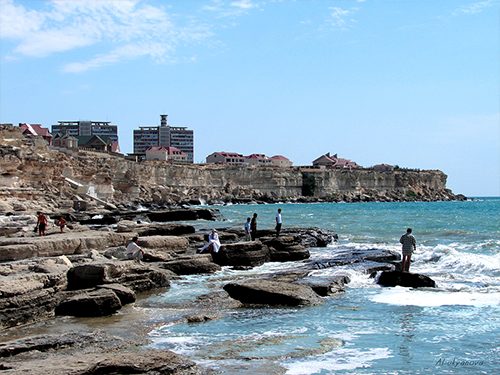 The Caspian Sea—the world’s largest lake—is about to go down in the world [1]. And with it could go the fortunes of some of the people of at least five nations. New research suggests that the Caspian, already receding at the rate of several centimetres a year [2], is to go into even faster decline: later this century, it could be nine or even 18 metres lower than it is now.

In the paradoxical world of climate change, sea levels will rise to threaten coastal settlements, but many of the great inland lakes could be doomed to dwindle.

Dutch and German scientists report [4] in the journal Nature Communications Earth & Environment that because more water will evaporate each summer, and less ice will form each winter, the area of the Caspian—which currently covers 371,000 square kilometres, an area greater than Japan or Germany—is doomed to shrink at an accelerating rate.

Lakeside communities, ports, and industries in Azerbaijan, Russia, Iran, Turkmenistan, and Kazakhstan, all of which border the Caspian, could be left high and dry.

“If the North Sea were to drop two or three metres, access to ports like Rotterdam, Hamburg, and London would be impeded. Fishing boats and container giants alike would struggle, and all the countries of the North Sea would have a huge problem,” said study co-author Frank Wesselingh of the University of Utrecht. “Here we are talking about a decrease of no less than nine metres, in the best case scenario.”

Co-author Matthias Prange of the University of Bremen in Germany warned that what happens to the Caspian could also happen to the great landlocked lakes on other continents. “This has to change. We need more studies and a better understanding of the consequences of global warming in this region.”

This is not the first such warning: although much of the world’s concern has been with the dramatic loss of water from the Aral Sea [5], researchers have worried about the impact of evaporation on the Caspian [6], too. It may be salty, but it is one of the world’s great inland reservoirs of water for industry, agriculture, and human settlement.

It is also host to a vast range of species, including the Caspian seal, an endangered creature that depends on winter ice to protect and rear its pups. Its shallow waters provide food for migrating birds, and serve as spawning grounds for its fish, including the sturgeon endemic to the region.

The Caspian Sea’s chief source of water is the Volga River: it has no connection with the ocean. So its water levels depend entirely on rainfall, evaporation, and inflow. In a world of global heating, evaporation is on the increase.

The level of rainfall, on the other hand, is likely to decline: in a world of climate change, those already semi-arid regions can expect to become more parched [7].

The authors expect these challenges will confront not only the dwellers by the Caspian Sea but also those hundreds of millions who live by, and depend upon, other lakes in Asia, Africa, and North America. The consequences for these people could be just as devastating as global sea level rise will be for others. They call for higher levels of awareness, and an international task force to help address the problem.

“Immediate and coordinated action is needed to make up for valuable time lost,” they write. “The shrinking Caspian Sea might serve as a poster child that will help galvanize such actions.”