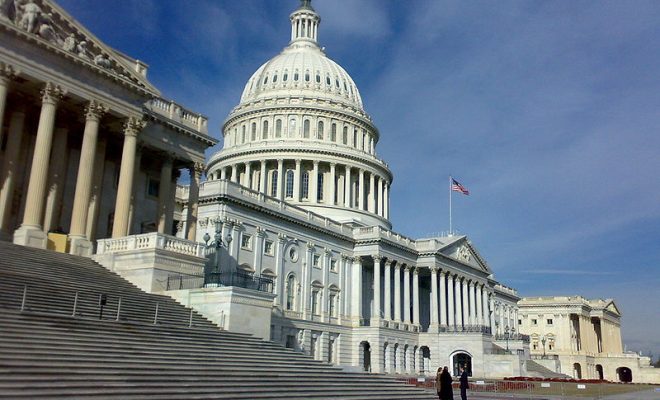 From solar and wind tax credits, to reductions in climate-busting hydrofluorocarbons, to financial support for battery storage, microgrids, combined heat and power, and carbon capture, the US$900-billion pandemic relief package adopted by the U.S. Congress late last month is being hailed as the most substantial federal investment and one of the biggest victories for climate action in a decade.

The legislation approved just before midnight December 21 “wraps together several bills with bipartisan backing and support from an unusual coalition of environmentalists and industry groups,” the Washington Post reported [1]. “It authorizes a sweeping set of new renewable energy measures, including tax credit extensions and new research and development programs for solar, wind, and energy storage; funding for energy efficiency projects; upgrades to the electric grid; and a new commitment to research on removing carbon from the atmosphere. And it reauthorizes an Environmental Protection Agency program to curb emissions from diesel engines.”

“The bill contains some big steps toward reducing emissions,” added [3] InsideClimate News clean energy analyst Dan Gearino. “Among them is a 15-year phasedown of hydrofluorocarbons, which an analysis [4] by the Rhodium Group says will cut emissions equivalent to 900 million tonnes of carbon dioxide, more than the total annual emissions in Germany.” The fractious U.S. Senate had previously defied the Trump White House [5] to reach agreement on a 2035 deadline to cut HFC emissions by 85%.

Support for the December legislation from several Senate Republicans amounted “to a rare party rebuke to Mr. Trump on the issue of global warming, after he spent the past four years mocking and systematically rolling back every major climate change rule,” wrote [6] New York Times climate specialist Coral Davenport. “The comity may also signal that while President-elect Joseph R. Biden Jr. is unlikely to secure his full climate plan, he may be able to make some progress in curbing global warming.”

The Times has details on the push to get the HFC provision through Congress.

Other highlights of the legislation included extensions to existing solar and wind energy tax credits and a new set of tax provisions for offshore wind, InsideClimate and Greentech Media [7] reported. “That’s a pretty significant change,” said Solar Energy Industries Association CEO Abigail Ross. “As we think about this solar decade, this gets us a lot of the way there.”

Greg Wetstone, CEO of the American Council on Renewable Energy, called the “common sense emergency relief measures” in the bill a “bipartisan vote of support for the renewable industry and the hundreds of thousands of Americans building our clean energy future.”

“We appreciate that Congress has recognized clean energy’s significant contributions to our nation’s economy and role in providing jobs and investments during the recovery from the COVID-19 pandemic,” said [8] American Clean Power Association CEO and former Cheniere Energy director Heather Zichal.

The tax credits “give breathing room to projects that may have been delayed because of the pandemic and were at risk of failing to qualify, or, in the case of the solar credits, were going to get a lower credit,” Gearino wrote. “Renewable energy business groups say this will translate to jobs, and help at a time when the renewable energy sector has had a net loss of 71,700 jobs, or 12%, since March.”

The legislation also expressed the “sense of Congress” that the U.S. Department of Energy should prioritize research consistent with a drive to 100% “clean, renewable, or zero-emission energy sources”, in what the Post called a “rare declaration that the nation should be striving toward net-zero carbon emissions.”

Advocacy groups “say the $35 billion of new funding for renewable technology and energy efficiency in the legislation will also help reduce pollution that is driving global warming and provide a much-needed boost to federal energy programs that haven’t been updated since 2007,” the paper added.

“It doesn’t have regulations or mandates in it,” added Sasha Mackler, energy project director at the U.S. Bipartisan Policy Center. “But from the bottom up, it’s advancing the technology that’s needed,” making the measure “a bill that creates the enabling conditions for decarbonization.”

But the Laborers’ International Union of North America (LIUNA) warned the tax credits were being extended in the absence of “important labour protections” for the workers who build the solar and wind industries. “Without safeguards, the wind and solar industries will continue to push down wages and benefits for workers and their families,” said [9] General President Terry O’Sullivan. “LIUNA opposes the use of public funds to drive low-wage job creation. Industries that receive federal assistance must be required to abide by labour standards that lift up workers and communities…something that neither political party seems to understand.”

While the energy provisions adopted by Congress received their share of the pre-holiday news coverage, there was no doubt the focus of the legislation was on the pandemic first and foremost. “It’s nice that other bipartisan priorities were able to ride on that, but we were under no illusions,” Rob Cowin, director of government affairs for climate and energy at the Union of Concerned Scientists, told InsideClimate’s Gearino. “First and foremost, this was about getting relief to the American people and keeping the government open.”

The bill included new research and development funds totalling $2.2 billion for grid modernization, $1.5 billion for solar, $1.08 billion for energy storage, and $625 million for wind, Greentech reported. It left out some of the incoming Biden administration’s key priorities, including a clean energy standard, carbon pricing, an investment tax credit for battery storage, and a “direct pay” financing option that would help renewable energy companies weather the economic downturn brought on by the pandemic. ICN identified the long-delayed [10] Vineyard Wind 1 project off Massachusetts as a likely beneficiary of the bill.

Grist said [11] the legislation included a first-ever tax credit for systems that recover waste heat from industrial processes that waste up to two-thirds of the energy they produce. It also delivered grant and technical assistance for microgrids, Microgrid Knowledge wrote [12].