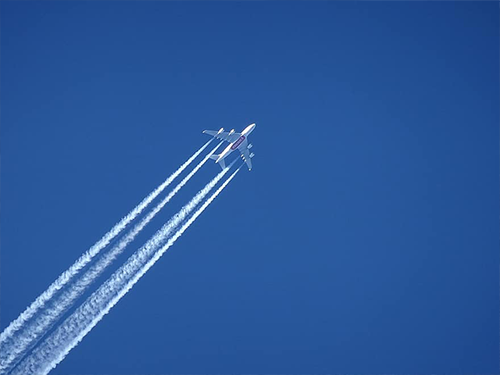 A new report from the European Union Aviation Safety Agency concludes that emissions of black carbon, nitrous oxide, soot, and water vapour were responsible for two-thirds of the total climate impact of the aviation industry in 2018—twice that of its CO2 emissions.

In a news release [1] heralding the study, Transport & Environment (T&E) welcomed the data as “an acknowledgement by the European Commission that contrails finally need to be addressed.”

Describing carbon emissions as “only the tip of the iceberg when accounting for aviation’s climate impact,” T&E aviation manager Jo Dardenne urged the EU to home in on the dangerous non-CO2 emissions that are accruing massively, if under the radar. Critical steps in reining in these pollutants include “ensuring air traffic doesn’t bounce back to pre-COVID levels” and “getting planes to fly smarter routes and use e-fuels from renewable sources.”

That effort is less daunting than it sounds, notes T&E, citing the report’s finding that “rerouting less than 2% of flights in Japan had reduced the warming effects of contrails by nearly 60%.”

The report urges the EU to promptly mandate that all jet fuel sold within its limits be blended with e-fuels.

Where the EU report errs, T&E writes, is in its suggestion that these changes could be delayed by as much as eight years.

“The EU cannot afford to wait five to eight years to implement these measures, as the report proposes, and… they need to be included in the Commission’s upcoming Sustainable and Smart Mobility Strategy,” urges T&E. “Contrail avoidance needs to be prioritized in the revisions of the Single European Sky, given its potential to deliver substantial cuts to aviation’s climate impact.”

Also in the recommendations: incentives for airlines to choose climate-friendly flight paths by putting a price on non-CO2 emissions.

“The European Commission was first tasked with addressing the non-CO2 emissions of flying in 2008,” said Dardenne. “It shouldn’t waste any more time in implementing the solutions that are available today.”