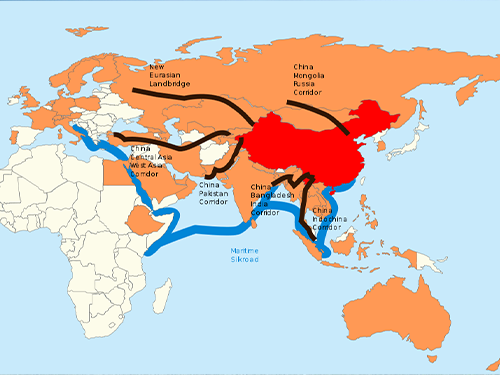 But the shift may depend on whether China’s power sector and heavy industries embrace the country’s roadmap [1] for a steep reduction in fossil fuel investment and use. If those sectors “do not proactively prepare for this transition, they may be tempted to pursue more high-carbon projects along the Belt and Road,” Chen warns.

The multi-billion-dollar Belt and Road Initiative [3] (BRI) is a massive, global infrastructure strategy that China adopted in 2013, involving investments in nearly 70 countries and international organizations. It includes countries that will ultimately make their own decisions about how and where to invest, but “where there is a need to address the financing gap for renewables [4] and to counter favourable perceptions of coal, oil, and gas,” Chen explains.

“Most BRI nations do not have [5] carbon neutrality commitments, and many see high-carbon infrastructure as required for economic growth, since that was how developed countries grew,” he writes. “China’s overseas lending has also generally flowed into fossil fuels rather than clean energy. As one indicator, only 2.3% [6] of overseas energy lending from Chinese policy banks (China Development Bank and China Exim Bank was for solar and wind between 2000 and 2018, while the rest was primarily for fossil fuels, large hydropower, and nuclear.”

More recently, some countries are running into problems with their investments in new coal projects, with Pakistan coming down in favour of more renewable energy, and Bangladesh rethinking several coal plants. “But there are worrying indications of a ‘dash for gas’ rather than renewables,” Chen says, “indicating the importance of national energy plans in determining the carbon content of planned BRI projects.”

While China’s state-owned enterprises (SOEs) have the negotiating clout to skew investments toward high-carbon projects, Chen says it makes sense for BRI countries to push back—and for China itself to shift the incentives so that SOEs favour renewables, mandate climate risk assessments for all BRI projects, and set targets for low-carbon investment. “This would support decarbonizing the BRI and reduce the risks faced by Chinese SOEs and banks of over-investing in high-carbon projects and technology,” while matching up with the country’s own domestic commitment to carbon neutrality.

Chen lists a dozen BRI countries where coal plants are stalled but renewable energy projects have succeeded. Which is all the more reason those countries “should examine China’s new carbon neutrality goal and decide if they are ready to put their weight behind low-carbon technologies like solar and wind power,” he writes. “If they do not, they face high risks for debt and stranded assets from investing in fossil fuel infrastructure, even as China’s domestic market phases out such projects.”

The basic operating principle, he adds, comes from veteran Chinese climate negotiator Xie Zhenhua: “pollute first, clean up later” is not the development path of the future.