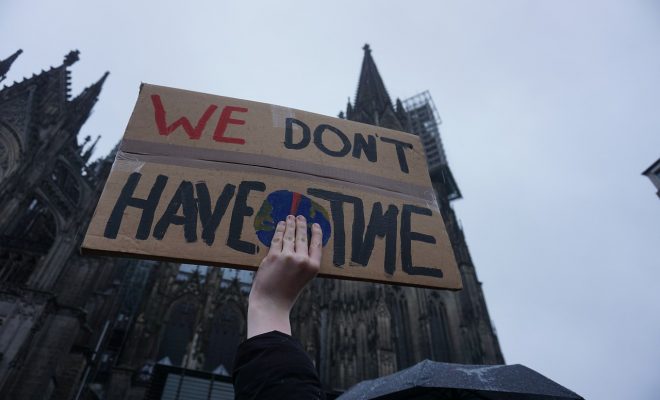 From Vienna to Seoul, Pretoria to Warsaw, Saskatoon to Hong Kong, youth climate activists—masked and social distancing—returned to the streets last week for a Global Climate Strike calling for a green and just recovery.

Alongside #FridaysforFuture pioneer Greta Thunberg, who marked the 110th week of her own climate strike in her home town of Stockholm, youth and adult supporters from nearly 3,500 communities in at least 150 countries gathered September 24 to speak out on the urgent need for aggressive climate action, reports [1] The Guardian.

While COVID-19 control protocols necessarily reduced the numbers on the streets, those who did attend were vocal and creative. Protests included marchers outfitting themselves in plastic bottle waste in Nairobi, people in New Delhi carrying signs reading “It’s getting hot in here,” and 18-year-old British Bangladeshi ornithologist and justice campaigner Mya-Rose Craig (aka “Birdgirl”) perching alone on an Arctic ice floe off the northernmost tip of Norway.

“I’m here because I want to see for myself what’s at stake as this crucial protector of the planet, the Arctic Ocean, melts away at a terrifying rate,” she told The Guardian.

Digital streaming played a role in the protests, too. “One innovation brought on by COVID restrictions was a 24-hour Zoom call, featuring people from across the world speaking about the issues in their region, interspersed with activism-related activities for callers,” The Guardian writes.

Other in-person protests included a demonstration in front of Australia’s parliament buildings in Canberra, where protestors held placards imploring leaders to “fund our future—not gas,” reports [4] Grist. Speakers at the event drew a clear connection between the government subsidies that support Australia’s gas industry and the wildfire infernos that now regularly terrorize its communities.

Meanwhile, marchers in Philippines “linked the strike to concerns over terror laws being used to outlaw protests, and to the plight of developing countries ignored by the rich world,” Grist adds.

“We Filipinos are among the most impacted, ranking second in the latest global climate risk index, yet our contributions to greenhouse gas emissions are so little,” said campaigner Mitzi Jonelle Tan. She said next to nothing is being done by those who, insulated for now from much of the climate crisis, have done so much to cause it in the first place.

Actions in Canada included a sit-in at an intersection in downtown Toronto [5] and a protest in Calgary [6], where youth promoted a theme of “The Planet Is on Fire… and So Are We” while expressing support for the We Are Not Going Back movement, and an op ed [7] in the Halifax Chronicle Herald by undergrad Sadie Quinn. Framing her argument through the lens of all she has learned in (often problematic) public school history classes, Quinn asks her readers to understand that instability breeds hunger for change—a hunger that can be destructive (such as historical rises in fascism), or profoundly healing (such as the many dimensions of the current fight to “build back better”).

Many in Quinn’s own demographic, she notes, are in no doubt as to which path they choose. “I am continually astonished by the ability of my generation to dream of a better future rather than passively watching the world burn,” she writes. “I don’t want to offer any silver linings to this situation, but I am inspired by every young person who is bringing the current potential for change to the attention of their peers, parents, and governments.”

Several pieces of positive news hint that the current discussions in the world’s halls of power may be leaning in a positive direction. In its coverage of the Global Climate Strike, The Guardian points to China’s surprise announcement [8] to the UN General Assembly in New York City that it is aiming for carbon neutrality by 2060, with the interim goal of having its carbon dioxide emissions “peak and then decline before 2030.”

Those commitments “would reduce global temperature rises by between 0.2°C and 0.3°C,” notes The Guardian. “If borne out, that would go a long way to keeping within reach the Paris Agreement target of holding temperature rises to well below 2°C, with an aspiration of a 1.5°C limit.”

Further hopeful news: UK Prime Minister Boris Johnson and UN Secretary General António Guterres have agreed to mark the fifth anniversary of the Paris Agreement by convening an interim meeting of all Paris signatories this December. All in attendance will be expected to come bearing detailed national plans to further reduce their emissions.

“Current commitments would result in temperature rises of 3.0°C, which would wreak devastation and extreme weather over swaths of the globe,” writes The Guardian.