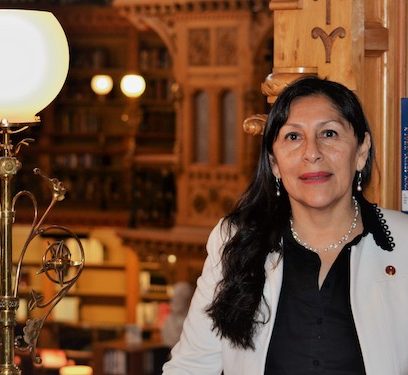 Sen. Rosa Galvez chaired the Department of Civil and Water Engineering at Laval University, where she led a research project on the consequences of the explosion and spill of an oil-carrying freight train in Lac Mégantic before she was appointed to the Canadian Senate on November 2, 2016. As a member of the Senate National Finance Committee, she played a leading role in a review of Canada’s economic response to the COVID-19 pandemic. In this interview, she assesses the federal government’s record so far in building a green recovery that focuses on people first.

The Energy Mix: You bring the expertise of an environmental engineer and a specialty in environmental impact and risk assessment to your role as a Senator. Rightly or wrongly, that’s not the image most Canadians have of the Senate! How readily do your colleagues accept your expertise?

Galvez: In 2015, senators would have fallen off their chairs if they had heard that someone like me was to be appointed to the Senate, because the appointments were partisan. That’s not the way it is today. I can’t speak for my colleagues or whether they accept what I say or believe, but I absolutely feel welcomed by my group of independent senators. I feel respected, heard, and yes, I know I have some influence with them.

I am an engineer specialized in pollution controls. I am a scientist. I’ve done the research, and I’m considered an expert in my field. But my job in the Senate is not only to raise awareness on an issue, in this case climate change, but to directly pressure the government and ask uncomfortable questions about transparency, about real economic data. I call the approach that defines my 35 years of professional experience the E5 nexus—a focus on environment, energy, education, employment, and equity—and it’s what I bring to the Senate. So I see it as my job to apply pressure, especially on the government, to see the cause and effect relationships in the science and evidence, and to accelerate the pace of transformation toward a more just and sustainable, lower-carbon economy.

The Mix: You’ve said the COVID-19 recovery must bail out people, not corporations. How’s that going so far?

Galvez: The government has so far provided around $700 billion to deal with the pandemic in the form of either direct support, tax deferrals, or credit and liquidity for banks and businesses. A portion of that—around $236 billion—has been direct support to individuals, businesses, and for health and safety. Of this amount that doesn’t need to be repaid, the majority, $189 billion, has gone directly to programs targeted at individuals. The CERB [Canada Emergency Response Benefit], the Canada Emergency Wage Subsidy, that’s all going to people, as we said in our report [2]. We did a lot of work to see if there were groups that were falling through the cracks, and yes, there were—like independent and part-time workers, Canadian and international students, and workers in day care and long-term care. We urged the government to look at those gaps and consider implementing a universal basic income for all.

The big question now is what’s going to happen with the money allocated for large corporations. Some of the funding has been announced [3], and the work on oil and gas methane reductions and orphan wells is under way. I know we can see that program from two perspectives. One is to ask why taxpayer funds should be required in the first place to help polluting industries clean up their mess. The other is that at least the cleanup fund is helping them curtail methane emissions that are far more damaging from a climate perspective in the short term than CO2, and the dollars are meant to go  directly to support the employment of workers who lost their jobs in oilfield services.

Along with transparency and accountability, one word I use a lot from my engineering dictionary is efficiency. When we say we want to inject money to stimulate the economy, we aren’t just spending money for the sake of it. We have to attach conditions to the funding and see what it gives us back in return. After the 2008 financial crisis, Canadians bailed out the automobile industry through the same mechanisms that are being deployed today and we didn’t get anything back—a huge chunk of the loans was opaquely written off, resulting in a loss to taxpayers, industries still closed, and jobs were still lost. We have to learn from that mistake.

My grandparents used to say: making a mistake is human, but persisting in that mistake is evil. I tell my children the same thing. It’s only human and natural to make mistakes, but if you start repeating them, there’s something wrong with the way you’re analysing your experiences.

So we have to attach conditions [4] to the bailouts. We have to ask questions. Open Government directives exist so that the government can be held accountable for its decisions. We’re there to ask those difficult questions.

The Mix: You’ve expressed a lot of concern about the way the economic measures in Bill C-13 [5] were introduced, particularly the financial relief for the fossil industry through the Export Development Corporation [6], and the lack of transparency on how and where the funds are flowing. Do you see any prospect that the government will make that information available?

Galvez: I raised this question repeatedly in the Senate. So far, the government has publicly announced EDC programs involving loans, but that is the tip of the iceberg of the many types of transactions the government can undertake through EDC and its Canada Account, with no scrutiny. Even regarding the loan program, there’s no information on the amounts that have been spent, the conditions attached, or when the companies have to pay back. The government has stated that transparency around these investments is critically important, and I’m very pleased that many of my colleagues on the National Finance Committee share this concern. I’ve asked the Parliamentary Budget Officer to undertake a study of EDC, and our report quotes the PBO’s concern about putting so much power and so much money in the hands of a couple of ministers with only limited scrutiny. The Auditor General had already raised red flags about the transparency of these processes in his report on the automobile industry bailout, and that’s become even more important now that they have broader capacity to lend money for domestic operations.

The Mix: In the election last fall, the Prime Minister promised tougher climate targets and green investment. Now, despite massive advocacy and reliable job and economic data supporting a just, green recovery, we see that fossil bailouts are getting the lion’s share [7] of the COVID stimulus money from federal and provincial governments in Canada, and in many other countries. Where’s the disconnect?

Galvez: You’re right to use the word “disconnect”. It’s true that we have mounting, abundant information about what Canadians want. There have been four polls, three Canada-wide and one for British Columbia, saying the majority of Canadians want a just, clean, green, fair, sustainable recovery. On the international scene, we’ve heard the same thing from most international organizations, from the OECD, the International Monetary Fund, the International Energy Agency, and others. Domestically, we’re hearing it from unions, municipalities, physicians, even bankers.

So on one side, you have all of this political will and interest and demand for climate action, on the other you have an industry that has a disproportionate influence on our government lobbying behind closed doors, even during the pandemic. We only have a partial view of this situation because the Lobbying Act  is overdue for a much needed revision. We need more transparency to make sure everyone is heard on equal terms.

You have oil and gas facing an accelerated pace of divestment internationally and a general disinterest in Canadian oil sands by international actors. And then you have the geopolitical situation, with the United States becoming a net exporter and flooding the international market, Saudi Arabia planning what to do when oil is finished, many different countries competing with Canada to export to the Asian market, and China and Asia making unprecedented investments in renewable energy.

So, the geopolitics are not favourable, it doesn’t make economic or environmental sense [to plan fossil fuel expansions], and international investors are now saying it’s too risky a business—that the assets will be stranded. I’m very worried that when that happens, it is Canadians who are still heavily invested through our banks, pension funds, and the public purse who will get stuck with the financial losses and environmental liabilities.

The question should not be whether we should keep funding the oilpatch to keep extracting and producing oil. It should be how we can help Albertans diversify their economy. I’ve worked with people in the Prairies who are creative, innovative, and hardworking, and I know they have so many advantages—renewable energy, but also forestry, petrochemicals, artificial intelligence, and agriculture. With so many options, you wonder why the provincial government is directing pension plan money into the fossil fuel industry when all indications say that’s not the right way to go.

It isn’t logical, and as an engineer, I don’t do well with poor logic. I want to see the numbers and the facts, and they aren’t there. I can only conclude there must be historical or ideological reasons that better explain why we aren’t where we’re supposed to be.

The Mix: We’ve been hearing that Deputy Prime Minister Chrystia Freeland is skeptical of a green recovery, and officials in the Department of Finance are skeptical of any economic stimulus at all. And we know the post-COVID recovery will probably be followed by a period of austerity to recover the government funds that are being spent now. Are we about to lose our last, best chance to invest in the transition off carbon?

Galvez: I’ve heard the same rumours as everyone else, and I’ve heard there may be some friction in cabinet. I also understand that everybody filters the situation through their own personal lens, myself included—I see this issue through my life experience, and I’m extremely worried about my grandchildren. But I always go back to the facts, because the facts settle me down. Minister Freeland’s mandate letter [8] includes a responsibility to move forward on climate action and introduce carbon reduction measures that exceed the country’s current 2030 target, and puts Canada on a trajectory for zero emissions by 2050. That’s a fact. It’s what she must deliver.

The other fact is that this is a minority government. In the last election, it was very evident that the majority of Canadians took the climate crisis seriously and wanted the government to do something about it. But then there’s the pressure exercised by lobbyists, and there’s a lot of disinformation about what the fossil fuel industry actually does for Canada. Are these mostly foreign-owned companies working for all Canadians, or for a very few? That’s why we need more transparency.

Canadians are saying loud and clear what they want—they’re attending the demonstrations, signing the petitions, co-signing the letters. They should know there are strong forces pushing in the other direction, and we should have stricter rules that would require much greater disclosure. So, we can’t lift the pressure—we have to keep on participating as citizens, as legislators, keep asking questions, proposing solutions, and demanding transparency, accountability, and efficiency.