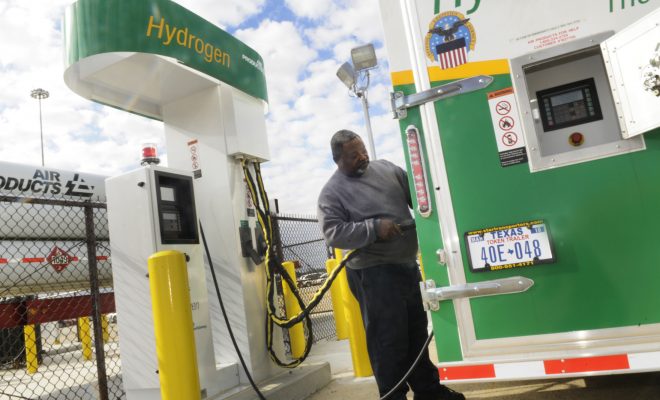 Less than two weeks after a report that renewably-produced “green” hydrogen could be cost competitive with fossil-dependent “grey” by 2030, a new analysis by banking giant Morgan Stanley says plummeting wind energy prices could push green hydrogen into the lead by 2023.

The analysis shows onshore wind costs that already come in as low as US$20 per megawatt-hour dropping to $5 to $7/MWh in the midwestern U.S. and Texas by 2023/24, Recharge reports [1]. That would bring green hydrogen down from $1.53 to $1.00 per kilogram and make it competitive with fossil hydrogen “much sooner than appreciated,” Morgan Stanley said in a note to clients.

Hydrogen prices had already made news in mid-July when IHS Markit said the price penalty for green hydrogen was set to fall over the next decade—and that 2020 would be seen as a turning point for the technology. “Costs for producing green hydrogen have fallen 50% since 2015 and could be reduced by an additional 30% by 2025 due to the benefits of increased scale and more standardized manufacturing, among other factors,” said [3] Simon Blakey, the firm’s senior adviser for global gas.

“The Morgan Stanley analysts admit the dramatic fall [in their more recent report] depends on ongoing reductions in the costs of electrolyser technology, and subsidies to support green H2 electrolysis, as well as an extension of the wind power production tax credit [4] to 2024, but said they see both ‘as highly possible’,” Recharge writes.

With those supports in place, “the U.S. offers one of the biggest potential markets for green hydrogen to act as a key driver of the energy transition by displacing fossil fuels,” the article states, citing the Morgan Stanley report. “As elsewhere in the world, grey hydrogen produced via unabated fossils currently dominates the U.S. market with a price of about $0.30/kg that excludes the capital cost needed to bring new capacity online.”

“We’re really excited about hydrogen, in particular when we think about getting not to a net-zero emissions profile but actually to a zero-emissions carbon profile,” NextEra CFO Rebecca Kujawa told investors. “When we looked at this five or 10 years ago and thought about what it would take to get to true zero emissions, we were worried it was extraordinarily expensive for customers.”

But now, “what makes us really excited about hydrogen—particularly in the 2030 and beyond time frame—is the potential to supplement a significant deployment of renewables [and energy storage]. That last amount of emissions you’d take out of the system to get down to zero could be most economically served by hydrogen.”