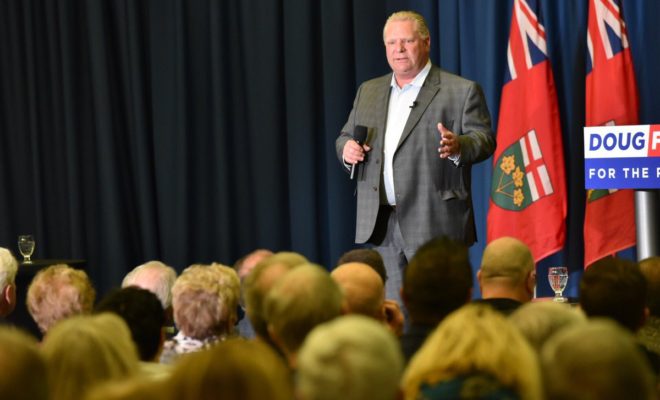 The Doug Ford government in Ontario passed its economic recovery legislation last week despite warnings from Auditor General Bonnie Lysyk the massive omnibus bill could violate the province’s Environmental Bill of Rights. Now an opposition MPP is asking the AG to investigate.

Bill 197, a 188-page measure tabled July 8, amended 20 separate pieces of legislation, “so it’s going to take some time to unpack it,” Environmental Defence Programs Director Keith Brooks told [1] The Energy Mix at the time. It was adopted just two weeks later, despite analysts’ concern that its up-front focus on transit-oriented development, affordable housing, air conditioning in long-term care homes, and even education policy was what Brooks called a “Trojan horse” for rolling back environmental protections.

Now, MPP Ian Arthur (NDP-Kingston and the Islands) wants Lysyk to give the bill a closer look. “What they’re doing is potentially illegal,” he said [3] in the provincial legislature. But it turned out the AG was already on the case.

“We thought we would give them a heads up to say, ‘you won’t be complying with that legislation if you don’t post it for 30 days prior to third reading,’” Lysyk told Global News.

“They put a clause in there that said they would be overriding the environmental bill of rights. And, you know, in our view, that’s not fair,” she added. “There is a requirement for consultation to retroactively say that act doesn’t apply.”

The province “says it will take the advice from the Auditor General but says this legislation allows for continued consultation, and that they will make sure the legislation will keep the environment safe while it moves forward with economic activity,” Global writes. “The Auditor-General says she will be looking into the possible violations of the Environmental Bill of Rights Act and will table a report on the matter later this year.”