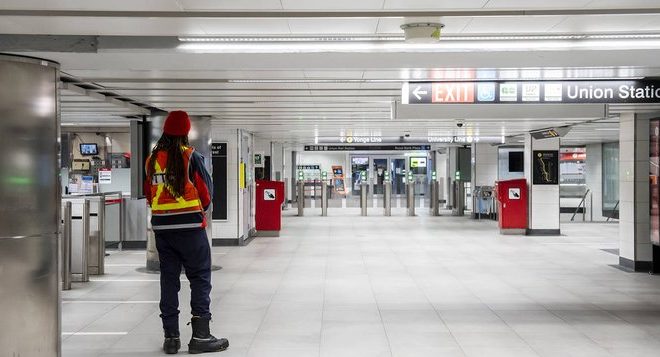 The long-suffering Toronto Transit Commission (TTC) is hoping to emerge as a major beneficiary of the C$19-billion emergency relief package for provinces and municipalities unveiled last week by Prime Minister Justin Trudeau.

“Details of the funding and how much Toronto will receive have not yet been made public, but the prime minister said operating funding for the country’s struggling transit agencies will be part of the relief package,” the Toronto Star reports [1]. “Under an agreement reached with provincial governments, funding for transit would be split evenly between Ottawa and the provinces,” and Ontario is in line to receive $7 billion.

“If we want people to participate in the economy they need to be able to get to work safely,” Trudeau said. “No one should have to turn down a job because they don’t want to risk their health during a crowded commute.”

Once the dollars flow, Tory said the Ontario government will get to distribute it, but most of it will likely go to the province’s largest transit agencies—with the TTC by far the busiest, with 520 million passenger trips last year.

“At the height of the pandemic, TTC ridership fell to less than 15% of pre-pandemic levels, dealing a huge blow to an agency that relies on fare revenue for about two-thirds of its operating budget,” the Star writes. The agency “continued to operate about 85% of its regular service to allow for social distancing on vehicles,” and now faces a $700-million deficit by the end of this year.

“I know Premier Ford is mindful of the size and of the scale (of) transit systems in Toronto and the rest of the GTA, and the tremendous damage that has been inflicted upon those very same transit systems by the pandemic,” Tory said.

So “I think it’s going to be a big help. We’ll know exactly how much help in the next short period of time.”

The Toronto Star has more detail [1] on the funding process and the staff and service cuts the TTC could still face.