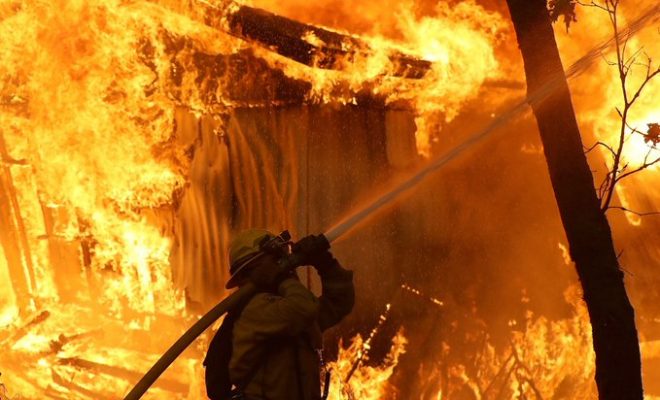 Mammoth California utility PG&E pleaded guilty yesterday to 84 charges of involuntary manslaughter, and was expected to acknowledge each victim by name, after sparks from its equipment set off the 2018 Camp Fire, the biggest wildfire in state history.

The plea follows the blaze that literally burned Paradise to the ground [1], and is “unparalleled for a publicly traded company,” Bloomberg reports [2]. “Over a period of about 40 years that prosecutors in the U.S. have tried to charge companies for killing people—mostly without success—the closest comparison is BP Plc’s manslaughter plea after 11 workers were killed in the 2010 Deepwater Horizon [3] explosion.”

PG&E “already has agreed to settle claims from insurers, individual fire victims, and local government agencies for more than US$25 billion,” the news agency adds. “It also received a $1.9 billion penalty from the California Public Utilities Commission. The criminal case is the company’s last unfinished business as it races to exit from bankruptcy in the wake of a series of wildfires in recent years.”

“This was extraordinarily difficult for PG&E to swallow,” Butte County District Attorney Mike Ramsey told Bloomberg, requiring the utility to acknowledge that “the evidence will show beyond a reasonable doubt that we killed 84 people and burned down a town by a criminally reckless fire.”

Ramsay said [5] yesterday his investigation had tied the fire to a broken metal hook, at least 97 years old, that had been supporting a high-voltage power line. The utility hadn’t built the 100-year-old tower that was holding up pieces of its equipment, and had no record of the hook.

PG&E called the plea deal “an important step in taking responsibility for the past and working to create a better future for all concerned,” adding that “we want to do right by the victims and the communities”.

But the guilty pleas and fines didn’t sit at all well with some of the families of Camp Fire victims.

“It doesn’t bring my daughter back—that’s the bottom line,” said Tom LeBlanc, who lost his 53-year-old stepdaughter, Kimberly Wehr. The plea “means something because they’re admitting the guilt,” but he said he still wanted to see company representatives in court to look the “PG&E people in the face,” explain how victims of the fire “were real people, they had lives,” and how “in four hours, it was all gone,” Bloomberg writes.

“They gotta hear my pain, and feel my pain, to get past this,” LeBlanc said.

Former victim representative Karen Gowins, who lost her home in the blaze, said she was “disgusted” the company would only pay a $4-million fine. “Why is it that PG&E continues to get away with murder and destruction while ignoring all the legal warnings, probations, government demands, [California Public Utilities Commission] oversight, and the court’s penalties?” she asked.

Gowins and other victims also asked why no PG&E executives will be sent to prison in the case, and why the plea deal doesn’t require the company to be placed under probation—as it was in 2017, following safety violations that led to a gas pipeline explosion, leaving eight dead.

But “Ramsey says his hands are tied,” Bloomberg says. “Under California law, corporations are treated like people when they are convicted of crimes, and PG&E is paying the same fine a person would face for an unintentional killing through negligence: $10,000 for each count of involuntary manslaughter.” The utility will pay another $50,000 fine for unlawfully causing a fire, plus costs.

Beyond that, “an individual found guilty of a single count of involuntary manslaughter might be locked up for as long as four years—but of course that’s not an option for companies,” the news agency explains. “And placing a company under court supervision as an alternative to incarceration is difficult because the law—written for people—gives defendants the option of declining probation in favour of spending more time behind bars.”

While the lawsuit winds down, wildfire season in the western United States is gearing up—and that has Californians nervous about the 125,000 miles/200,000 kilometres of power lines that PG&E operates. Last week, Bloomberg Green said the utility planned to draw about 450 megawatts from mobile diesel generators to keep the power on when it has to shut down the grid in dry, fire-prone conditions—despite the health and environmental impacts of diesel.

“PG&E said it considered more environmentally-friendly options but they proved too costly or impractical to deploy in time this year,” Bloomberg writes [6]. “The company said its mobile generators can use fuel made from vegetable oil and that it will continue to explore cleaner alternatives for the coming years.” It’s also working with communities to develop renewable energy microgrids.