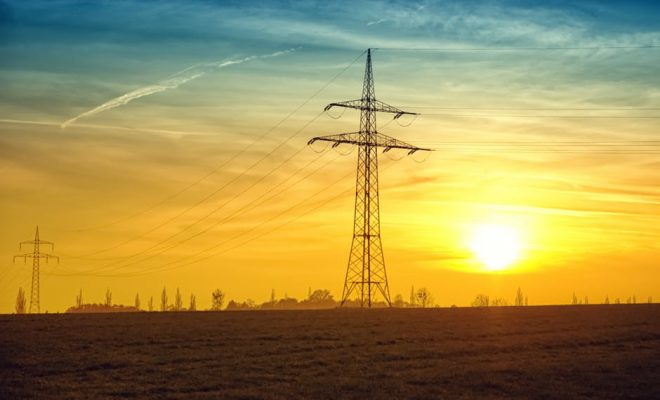 Clean electricity could power 90% of the United States grid by 2035, at lower cost than non-renewable sources, according to a new study released this week by the University of California Berkeley and Berkeley-based GridLab that projects more than a 10% reduction in electricity costs if utilities can make the transition.

The shift includes a complete coal phaseout in the next 15 years.

“By using updated cost figures for wind, solar, and batteries, the researchers found that it will be economically feasible to power a reliable grid by 2035, while only depending on natural gas for 10% of annual electricity production,” Greentech Media reports [2]. The plummeting price points explain how “in  just a few years, decarbonizing the grid went from a solar-lover’s pipe dream to something many major American utilities have committed to.”

The difference, Greentech says, is that while utility giants like Southern Company and Duke Energy have published mid-century targets—well beyond the tenure of today’s executives—the new cost data set a much shorter time horizon.

“Previous studies concluded either we need to wait until 2050 to decarbonize or the bills will go up if you decarbonize,” co-author Amol Phadke of UC Berkeley’s Energy and Resources Group told media. But now, “I think we really need to revisit these conclusions because of the dramatic decline in costs.”

The UC Berkley-GridLab scenario “retires all coal plants by 2035 and does not require any new construction of gas plants,” Greentech writes. “The cost of wholesale electricity would be 13% lower than it is today, in contrast to the common assumption that a shift to clean energy would radically increase expenses.”

If the numbers sound too good to be true, that’s because “the high-level problem of designing a clean grid is to maximize the use of cheap, intermittent solar and wind power while maintaining enough dependable capacity to meet demand all year long,” the industry newsletter adds. But “setting the target at 90% clean removes the need to run the system only on renewables at all times; it can burn a little gas when absolutely necessary. This proved durable for meeting demand in every hour of the seven years modeled in the study to test reliability under annual variations in weather.”

The scenario also addresses concerns about the billions of dollars that would have to be spent on new transmission lines—and the often fierce local opposition that would greet those proposals—arising from past clean electricity scenarios. “As the price of wind and solar have come down dramatically, the…conventional wisdom that wind is only cost-effective in the wind belt in the middle of the country, solar is only cost-effective in the sunny Southwest—that’s not true anymore,” said GridLab Executive Director Ric O’Connell. “While we still need to build significant transmission, most of that transmission is more regional as opposed to interregional.”

The report says the cost of those regional “transmission spurs” would be more modest.

Greentech says the UC Berkeley-GridLab study didn’t address demand response or other energy efficiency options to reduce peak demand for expensive and methane-intensive natural gas. But last week, the Lawrence Berkeley National Laboratory reported that U.S. utilities’ natural gas efficiency programs had saved energy at a cost of 40¢ per therm between 2012 and 2017, less than half the cost of supplying gas at $1 per therm, Utility Dive reports [3].  [A therm [4] is an Imperial measure for the amount of heat it would take to raise the temperature of a pound of water by 1.0°F. We’re going to let down everyone outside the U.S. and not stop to convert all those items to metric.—Ed.]

“Utilities say they recognize the benefits of efficiency,” Utility Dive writes, with American Gas Association spokesperson Jake Rubin pointing to US$1.41 billion in natural gas efficiency investment in the U.S. and another $60 million in Canada. “With these significant investments, natural gas utilities helped their customers save 259 trillion BTUs of energy and offset over 13.5 million tonnes of carbon dioxide emissions from 2012 to 2018,” he wrote.

But “efficiency advocates say they want to see more investment in energy-saving programs, as a means to reduce carbon emissions and investment in unnecessary infrastructure,” Utility Dive says. Natural gas “may be the least polluting fossil fuel, but it still results in a significant carbon footprint, which is exacerbated by leaks during its production and transportation,” wrote Sheryl Carter, power sector director at the Natural Resources Defense Council, in a May 29 blog post. “When electric technologies are more efficient, utility programs can be a way to encourage customer adoption, but it is not yet common to assess end use efficiency across fuels, so we don’t always end up with the cleanest and most efficient solutions.”

More good news from The Energy Mix. Unfortunately not all climate news offers a bright outlook. For example, a team of the world’s most eminent climate scientists and biologists believe we’re headed for the collapse of civilization. And it may already be too late to change course. Will Steffen, Australia’s top climate scientist says “we are already deep into the trajectory towards collapse” of civilization, which may now be inevitable because 9 of the 15 known global climate tipping points that regulate the state of the planet have already been activated.

Steffen, a distinguished researcher, educator, scientific adviser to governments, and widely published on climate science, along with top scientists, laid out our predicament in the starkest possible terms in a November, 2019 paper for the journal Nature. Titled, “Climate Tipping Points — Too Risky to Bet Against,” the article was co-authored by Steffen along with other notables:Joachim Schellnhuber, Johan Rockström, Stefan Rahmstorf, Katherine Richardson, Timothy M. Lenton and, Owen Gaffney.

The Nature article was just one of several sources highlighted in a lengthy June 5 piece entitled, “Collapse of Civilization Is the Most Likely Outcome: Top Climate Scientists”. Steffen, one of several scientists interviewed for the piece, contends that humanity’s three main challenges — climate change, degradation of the biosphere, and growing inequalities between and among countries — are facets of one problem — neoliberal economics. Furthermore, he says, evidence shows that even if the government was committed to renewable energy, “green growth” is just not possible at a global scale in an acceptable time frame.

According to Steffen – “…it’s highly likely that by 2030 we’ll know what pathway we’ve taken — the pathway towards sustainability or the current pathway towards likely collapse. I think the ‘fork in the road’ will come in this decade, probably not a single point in time but as a series of events.”