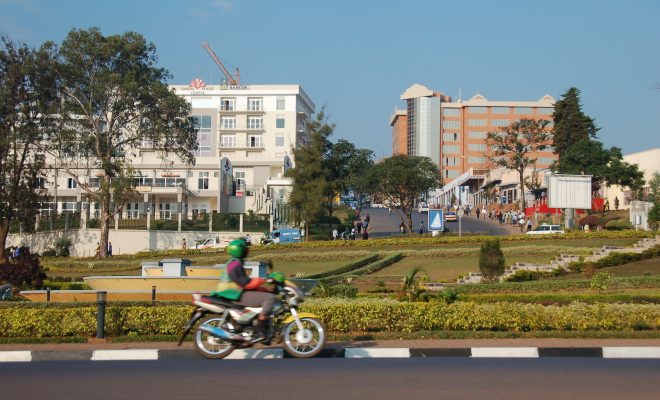 One of the world’s poorest countries became one of its more ambitious climate leaders last week, when Rwanda became the first African nation to promise deeper greenhouse gas emission reductions and a more ambitious approach to climate adaptation by 2030.

In a formal filing with the United Nations climate secretariat, the country of 12.5 million people promised to reduce its emissions at least 16% by 2030 compared to a business-as-usual baseline. “Subject to technical, financial, and technological support from richer nations, the small, landlocked country said that could go up to a 38% emissions cut in the next decade,” Climate Home News reports [1].

“Our country is already counting the cost of climate change. We have already tragically lost more than 140 citizens and more than 3,000 homes due to floods and landslides this year alone,” said Environment Minister Jeanne d’Arc Mujawamariya. “With this new, more ambitious climate action plan, we have a clear roadmap to limit our already low emissions and ensure our society and economy are resilient to the impacts of a warming world.”

Rwanda’s original Nationally Determined Contribution (NDC) under the Paris Agreement laid out a suite of policies to cut emissions, but set no quantifiable reduction target. The plan was subsequently updated to include hydrofluorocarbons (HFCs). Rwanda’s capital, Kigali, was the site [3] of the October, 2016 meeting where nearly 200 countries agreed to phase down their use of HFCs, a decision sufficient on its own to prevent 0.5°C of average global warming.

Helen Mountford, vice president for climate and economics at the World Resources Institute, said the new plan is “significantly more robust” than its predecessor, Climate Home reports. “As the first African country—and least developed country—to submit a strengthened climate commitment in 2020, Rwanda is demonstrating the kind of leadership that the world needs right now,” Mountford said.

UN Climate Secretary Patricia Espinosa congratulated the country, tweeting [4] that “as COVID-19 has not postponed the climate crisis, I am looking forward to receiving more updated ambitious #NDCs from other countries”. Mohamed Adow, director of Nairobi-based Power Shift Africa, told Climate Home that leaders in the UK, Canada, Australia, and New Zealand should “take heed and ensure their own new climate plans are equally radical”.

With economic growth that exceeded 10% last year, the World Bank said Rwanda was in the “middle of an economic boom” when the COVID-19 pandemic hit. Which meant that, under a business-as-usual scenario, the country’s carbon emissions were forecast “to more than double between 2015 and 2030, rising from 5.3 million tonnes of CO2 equivalent to 12.1 million tonnes in 2030, driven by a rise in fossil fuel use, increasing energy demand, and road transport,” Climate Home writes.

But “with technical and financial support, Rwanda estimated it could reduce its total emissions by 4.6 million tonnes of CO2 by 2030. Measures include the deployment of hydro and solar energy, improving energy efficiency in industrial processes, introducing vehicle emission standards, rolling out electric vehicles, and promoting on-farm biogas use.”

Rwanda’s economy is also very vulnerable to climate change, relying on rain-fed agriculture to sustain rural livelihoods and coffee and tea exports, and on hydropower for more than half of its electricity. Rainfall has become “increasingly volatile in recent years,” Climate Home says, with the government predicting a five to 10% increase in variability.

“To address this, the plan includes adaptation measures across seven sectors—water, agriculture, land and forestry, human settlement, health, transport, and mining—to cope with climate impacts,” the UK-based publication states. But “Rwanda will need around US$11 billion to achieve the full potential of its climate plan, including $5.7 billion for carbon-cutting measures and $5.3 billion for adaptation—with measures conditional on international support accounting for 60% of the estimated cost.”