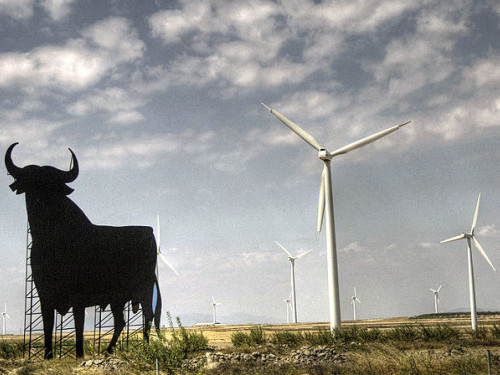 The Spanish government is expected to table a draft law today that will aim for net-zero carbon emissions by 2050, call an immediate halt to new coal, oil, and gas projects, and ground the country’s economic recovery from the coronavirus pandemic in a green transition.

With the release of the legislation, “Spain joins a handful of countries to have set out a legally binding strategy to end their contribution to global heating in the next 30 years,” Climate Home News reports [1], based on draft text that had been open for public consultation since February 2019.

“At a time when we have to address the COVID-19 recovery process, the energy transition is going to become an important driving force for generating economic activity and employment in the short term, and in a manner consistent with what we will need as a country in the medium and long term,” said Vice President and Economic Transition Minister Teresa Ribera.

“We would like to have presented this law in other conditions, several weeks ago,” Ribera added. But the legislation, which she cast as “a useful guide” to the coronavirus recovery, “offers us an incredible opportunity to debate about the country that we want to be,” providing “an institutional framework for the action that science and people are asking for, and it comes at a time when it is more necessary than ever.”

Climate Home notes that Spain lost more than 27,500 citizens to COVID-19, making it one of the hardest-hit countries in the world. Now, “the government forecast the plan would generate more than €200,000 million of investments in the next decade and create up to 350,000 new jobs every year,” while boosting economic growth 1.8% through 2030 compared to business-as-usual modelling.

“In the short term, the government identified energy efficiency measures and renewable deployment as leverage for economic recovery,” the UK-based publication says.

“Under the law, which still needs to be approved by Parliament, the government is pledging to make Spain’s electricity system 100% renewable by the middle of the century, ban all new coal, oil, and gas extraction projects with immediate effect, end direct fossil fuel subsidies, and make all new vehicles emission-free by 2040,” Climate Home adds. “By 2030, the government pledged to reduce emissions 23% from 1990 levels and double the proportion of renewable sources in total energy consumption to 35 to 42%—an objective it described as consistent with the EU bloc-wide target to cut emissions 50 to 55% by 2030.”

To hit the renewables target, the government plans to cut energy consumption by 35%, primarily through building retrofits, and boost clean energy sources to between 70 and 74% of the electricity mix over the next decade.

Key elements of the draft law were to include: