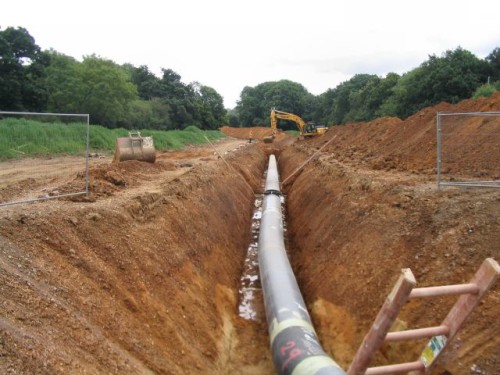 The state Department of Environmental Conservation (DEC) “said the construction of the pipeline in the ecologically sensitive, historically contaminated, and recovering area—particularly near Raritan Bay—would have an unacceptable negative impact on water quality,” the publication reports [1]. “It’s also incompatible with the state’s goal to reduce emissions by 85% from 1990 levels by 2050.”

“New York is not prepared to sacrifice the State’s water quality for a project that is not only environmentally harmful but also unnecessary to meet New York’s energy needs,” said DEC spokesperson Erica Ringewald.

While this isn’t the first regulatory setback for the contentious pipeline, it appears to be the last, NJ Spotlight writes [3], with a senior executive with Tulsa, Oklahoma-based Williams Co. declaring the company will abandon the project.

“While we continue to believe in the fundamentals of this project, we will not refile in New Jersey or New York at this time,’’ said Laura Creekmur, the pipeliner’s vice president of communications and corporate social responsibility. “The decision to pause this important infrastructure project is unfortunate for the region as the design and construction would have generated valuable economic activity in Pennsylvania, New Jersey, and New York, and would have directly and indirectly supported more than 3,000 jobs during the construction period.”

But NJ Spotlight says gas supplier National Grid “acknowledged earlier this month in a submittal that alternatives including enhancement of existing infrastructure combined with energy efficiency and other conservation measures could be sufficient to meet New York’s energy needs.” Politico phrases National Grid’s position a bit differently, reporting that the company had seen the pipeline as the “most reliable option” for shifting new buildings off oil over the next 15 years, but “identified a preferred alternative to the pipeline that involves trucking in more gas and upgrading an existing pipeline system.”

DEC’s regulatory decision cited that report, and also pointed to the need for Williams to bury its pipeline six feet deeper than it had assumed to accommodate transmission cabling for a nearby offshore wind project.

But National Grid’s preferred option “may also run into roadblocks because it requires permits and agreements for new liquefied natural gas infrastructure with Mayor Bill de Blasio’s administration. The mayor has said he won’t support new gas supplies for the city but hasn’t required new construction to go electric, which would cut demand,” Politico says. “Environmental advocates want National Grid to close its forecasted supply-demand gap, which they also question, but with energy efficiency measures, demand response (whereby some customers would switch to fuel oil on the coldest days), and heating electrification.”

Jeff Tittel, director of the New Jersey Sierra Club, cast the DEC decision as a win in the fight to put an end to new fossil fuel projects. “It’s a major breakthrough in the battle against new pipelines,” he said, adding that New York grounding its opposition to the project in its concerns about the climate crisis “is a big sea change”.

“This decision shows that the right things can happen when you work hard and stick to what you know is right,’’ said New Jersey League of Conservation Voters Executive Director Ed Potosnak, who lives near the site where a compressor station for the pipeline would have been built.

The Institute for Energy Economics and Financial Analysis (IEEFA) calls the DEC decision a “victory for ratepayers and taxpayers”, adding that the pipeline was unnecessary and would have cost more than $3 billion to complete.

“The DEC decision recognizes that improved energy efficiency, peak demand management, and more competitive renewable resources can be used to substitute for large, expensive pipeline projects,” IEEFA says [4], and “the decision also is based on sound economic policy. New York is already achieving its economic growth targets relying on cost-effective alternatives,” with an industrial sector that “ranks first nationwide in energy efficiency, and its commercial sector provides more jobs per unit of energy than many other states. Businesses already know that investing in sustainable solutions improves profitability.”

But NJ Spotlight says the Williams pipeline won’t be the last big fight for climate campaigners in New York and New Jersey. “Many fossil fuel projects continue to move forward in New Jersey, including a 144-megawatt power plant in Kearny to power NJ Transit and Amtrak trains and a proposed 1,200-MW gas plant in North Bergen,” the paper says.