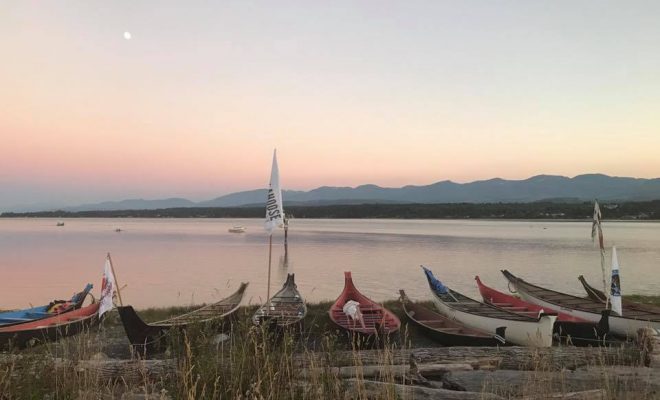 The Shinnecock Indian Nation—the original inhabitants of Long Island—are using deep-rooted maritime and ecological knowledge to protect what remains of their ancestral lands from an escalating climate crisis.

“A maritime people who once spanned a large swath of the eastern Long Island shore, the Shinnecock Indians have been hemmed into a 1.5-square-mile patch of land on the edge of a brackish bay,” writes [1] the New York Times. Now, courtesy of climate change, “they’re battling to hold on to what they have left,” using only what nature already provides: beach grasses, sand, boulders, oyster shells—and the ever-present wind.

The work is “a forever battle,” writes the Times, but the Shinnecock are determined to keep fighting on with the materials at hand.

“We have an inherent responsibility to protect the homeland,” said Shavonne Smith, director of the tribe’s environmental department. Describing how her 500-strong community has been working to expand their shorefront’s oyster reef to weaken the destructive power of the waves, she added: “It’s not the type of thing where you can work against nature. You work with it.”

The Shinnecock began their efforts in 2016, working to “restore a modest 3,250-foot stretch of beach and buffer the burial grounds that lie just beyond.” The first step, explains the Times, was to pour 30,000 cubic yards of dredged sand onto the degraded strip. Biodegradable bags filled with oyster shells, which also act as a natural water filter, “were then laid in rows to calm the waves,” and community workers planted and propagated local species of grass seed: “sea grass in the bay, cord grass for the intertidal marsh area, and a native beach grass called Ammophila breviligulata to hold down the sand.” Finally, “a row of rocks was planted near the high tide line to protect the cord grasses from the southwestern winds that blow across the bay in summer.”

Today, the rewards of this careful labour are showing. “The beach grass is flourishing. The dunes gently slope upward,” writes the Times. Above the beachfront, sassafras, oak, and elderberry trees protect ancestral grave sites.

But, as the Shinnecock know well, “nature does what nature will,” and more needs to be done. Already, “ducks have eaten much of the cordgrass,” notes the Times, and “more sand will have to be poured on the beach.”

The Shinnecock’s nature-based solutions to rising seas are keeping company with similar efforts around the world, including attempts to buttress the shores of the Florida Panhandle with native marsh grasses, and to buffer Vietnam’s coastal communities by restoring mangrove forests.

“To what extent these natural defences will succeed in slowing down climate hazards remains uncertain,” writes the Times. “Ultimately, it depends not on nature, but on how quickly the world as a whole reduces the emission of planet-warming gases and stems the rate of sea level rise.”

The current outlook, however, is grim. Citing a climate adaptation report prepared by the Shinnecock, the Times reports that sea levels will rise in the area anywhere between 2.1 and 4.4 feet by 2100. And flood risk is severe, with increasing chances of “chronic floods of six feet or more” in the decades to come.

Has the Shinnecocks’ experiment succeeded in saving their land from being devoured by the sea? Dorothy Peteet, a paleoclimatologist at the Lamont-Doherty Earth Observatory at Columbia University, says it has—for now.

“The question is how long will it work,” Peteet told the Times. “It all depends on how fast the sea comes in.”