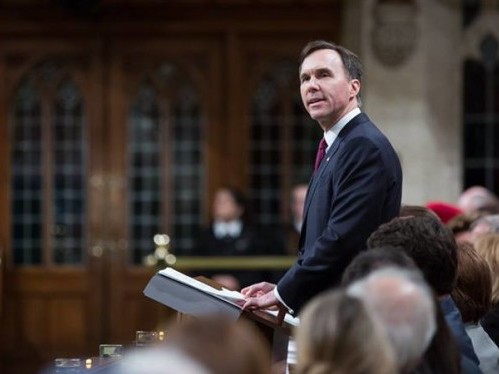 A federal aid package for Canadian fossil companies is just hours or days away, Finance Minister Bill Morneau told a Senate committee Wednesday, as the industry’s capital spending cuts hit C$6.5 billion and the price of western Canadian crude oil fell as low as US$9.09 per barrel.

Fossil advocates are insisting on a bailout in spite of alarming new analysis [1] from within the oilpatch itself, concluding that the industry “has never faced a greater threat to its existence than it does right now.” The report said the country’s top oilfield service companies have let their debt levels reach about 60% of their total market value.

On Monday, the Globe and Mail said a Canadian bailout wasn’t likely this week. “This week’s focus is passing legislation to deliver a COVID-19 emergency response package for all Canadians,” an unnamed federal source told [3] the paper. “Work is under way on further support for [fossil] energy and other impacted sectors of our economy.”

But Morneau indicated Ottawa will be stepping up very soon.

“I don’t have the final answer on the exact hour that that will be delivered,” he said [4], referring to borrowing arrangements his officials were working out for the industry, “but I’m not talking about weeks. I’m talking about hours, potentially days, that we can ensure that there’s credit facilities for especially the small- and medium-size firms in that sector.”

Morneau told senators the 10 biggest fossils in the country’s oilpatch “have existing credit relationships with their banks and, in most cases, have available credit,” CBC reports.

“But they are under strain, too,” the minister said. “So we’re also looking at individual issues in that sector. Those are all important.”

“You’ve seen how producer companies who are our customers are cutting back on their capital budgets and their expenditures,” and “that means there is not work for employees of our member companies,” he said. “Liquidity for these companies will be a big issue for governments in determining how we can recover from some circumstances we find ourselves in.”

But CBC also points to this week’s widely-circulated open letter to Prime Minister Justin Trudeau from a group of environmental, labour, and faith organizations representing about 1.3 million people. “Giving billions of dollars to failing oil and gas companies will not help workers and only prolongs our reliance on fossil fuels,” the groups wrote [5]. “If you pour money into the wealthiest people in the country and the biggest corporations, it doesn’t trickle down to the workers,” added Rev. Cheri Di Novo of Toronto’s Trinity St. Paul’s United Church. “It tends to stay at the top.”

On Wednesday, a group of 265 academics [6] from 33 universities and 12 associations released their own letter to Trudeau. “Given that the proposed bailout package has been negotiated secretly with the United Conservative Party (UCP) government of Alberta and the Canadian Association of Petroleum Producers (CAPP), Canadians have a right to be concerned that its contents may represent only a narrow set of perspectives and interests,” they wrote.

“As Canadian researchers in multiple fields related to the climate crisis and the economy, we urge the government to channel public revenues both to the immediate health crisis, and toward economic planning that will provide long-term benefits for Canadian workers and families, our ecosystems, and the climate,” they added. “We also urge governments at all levels to avoid sacrificing democratic principles in the name of expediency, by including a broad range of civil society representatives in decision-making about how these large investments in our future will be made.”

The industry analysis by University of Calgary School of Public Policy fellow Richard Masson and economist Jennifer Winter concluded that crashing oil demand, combined with a surge of new supply from Saudi Arabia and Russia, “presents a challenge to the Canadian industry that is greater than either the oil price crash of 2014 or the National Energy Program of the 1980s,” the Financial Post writes.

“During each of those two shocks, Masson said, Canadian companies were able to move rigs and investment dollars to the U.S.,” the paper adds. “But with some investment banks projecting that up to 40% of U.S. oil producers could fail in the next two years, ‘it seems companies don’t have a lot of good options,’ Masson said.”

But the two analysts are joining the call for Ottawa to throw good money after bad, concluding that a mere C$2 billion to buy preferred shares in the failing fossils could “substantially improve balance sheet ratios and provide cash to help prevent insolvency.”

On Monday, TD Securities calculated [3] capital expenditure cuts by fossils across North America at US$20 billion, but found those measures would only reduce output by 1.3 million barrels per day, out of a total U.S. and Canadian production of 17 million barrels. “This is a massive reduction, but pales in comparison to near-term global demand destruction,” wrote TD analyst Aaron Bilkoski. At the time, various estimates were putting the global demand drop at eight to 11 million barrels per day. In a media briefing yesterday, International Energy Agency Executive Director Fatih Birol calculated [7] the daily total at 20 million barrels.

On Tuesday, Suncor announced [8] it was partially shutting down production at its Fort Hills tar sands/oil sands mine due to “extremely low” prices.