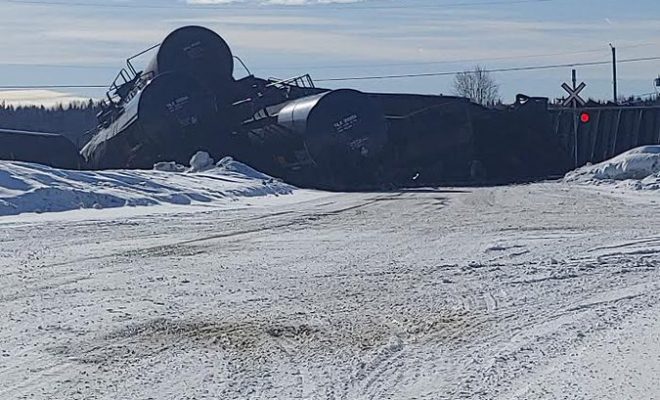 In yet another Canadian freight train derailment, 27 cars left the tracks near Prince George, British Columbia last week, forcing the evacuation of a local elementary school and leaving a nearby creek contaminated with petroleum coke.

While CN Rail officials initially said there “were no leaks or spills” from the train, which derailed on March 5 just 200 metres from Giscome Elementary, they later corrected the report, announcing that “a small amount” of petcoke spilled, reports [1] CBC. CN was also quick to assure the public that “there were no fires and no danger to public safety” after the incident; however, “some people at the scene noticed a burning smell.”

Describing petroleum coke as a “non-hazardous byproduct” of the petroleum refining process, Jonathan Abecassis, the rail company’s senior manager for media relations, said that “CN environmental experts as well as regulatory authorities have been deployed to oversee the physical removal of the product from the creek.”

That statement appeared to contradict health concerns with petcoke that have arisen from the United States [3] to India [4].

The Prince George derailment is the latest in a series of “more than half a dozen derailments across Canada, with at least three in B.C.,” CBC noted [5] in its initial coverage of the incident. In February, “following two fiery derailments [6] of oil-carrying Canadian Pacific trains in Saskatchewan in as many months,” the federal government lowered the speed limits for trains carrying dangerous goods outside metropolitan areas to 40 kilometres per hour.

But “that order was revised a week later, allowing trains to travel up to 80 kilometres per hour in non-metropolitan areas where there were signalized tracks,” added CBC. In the Prince George incident, “it is not known if speed was a factor in the latest derailment.”

As of March 6, CN had not released any further information about what caused the train cars to leave the tracks. The Transportation Safety Board has begun its investigation.