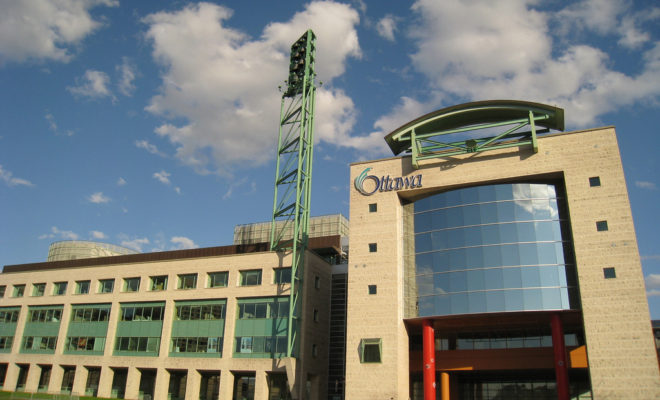 A program of mass, deep energy retrofits to dramatically increase the efficiency of Ottawa’s existing building stock must be at the centre of the city’s plan to hit net-zero carbon emissions by 2050, veteran energy modeller Ralph Torrie told a packed house at Ottawa’s Impact Hub late last month.

Such a coordinated strategy, sufficient to halve the average space heating intensity of the city’s homes by 2050, would be “a massive jump toward the goal of net-zero,” and a key cornerstone for any effort to deliver a carbon-free electricity grid by 2050, Torrie said, during an event co-hosted by Energy Mix Productions and six other environment and community groups from across the city. But without a concerted effort, he noted, Ottawa will be left without a viable pathway toward a low-carbon future.

Rebecca Hagen, project manager for the City of Ottawa’s Climate Change Resiliency Unit, said recent models show 90% of the homes Ottawans will occupy in 2050 have already been built. With buildings currently accounting for 45% of local greenhouse gas emissions, the city will need a rapid, wide-ranging retrofit strategy that matches the scale of the challenge.

Which means the city no longer has the luxury of moving slowly: Torrie’s calculations show that Ottawa needs to retrofit an average of 10,000 to 15,000 homes a year over the next three decades.

The job ahead is immense, but these are “exciting times for energy modellers,” he told participants. After decades of tepid interest in climate action—during which his clients were more likely to ask “what an energy transition could do for them,” rather than “what they could do for the energy transition”—Torrie is now being asked what can be done to reach an ambitious target.

“Progress on energy transition [is] now limited more by human and institutional shortcomings than by lack of money or technology,” he said. While the cost of a city-wide mass, deep energy retrofit campaign would be high, the Darlington Nuclear Power Station and the Athabasca tar sands/oil sands stand as proof that Canadians aren’t always averse to taking on big, expensive projects. What’s lacking is not the technological or financial capacity, but the specific business plans and policy models that will funnel sufficient capital flows into deep energy retrofits.

At present, the risks and upfront costs of retrofitting fall primarily on the homeowner, a model Torrie believes is no longer viable. A successful mass retrofit program instead requires that the risks, costs, and benefits are evenly distributed across stakeholders in government, the private sector, and the local community.

The past holds proof that such a rapid transition is possible, he added. The U.S. auto industry’s pioneering use of consumer credit, for example, allowed it to catalyze dramatic social and technical changes in a remarkably short span of time—fully shifting the country from horse power to engine power in just three decades. Torrie challenged today’s business class to follow that example, and take a more active role in devising the financial system the energy transition requires.

The City of Ottawa, meanwhile, must be willing to take a leading role in developing pilot projects that clearly demonstrate the potential of mass deep energy retrofits in practice. To have the best chance of success, said Torrie, project managers will need to coordinate with the city’s existing renovation cycle, “identifying and exploiting synergies with other community objectives such as densification, neighbourhood redevelopment, and social housing investment.”

And while speed is essential, it’s even more important that mass retrofit pilot projects set the right standards from the outset, modelling “deep” rather than “shallow” energy retrofits, said Torrie. If the energy efficiency targets the city adopts in the first phase of a mass retrofit strategy are insufficiently ambitious, it risks squandering the opportunity to set a course for carbon neutrality by 2050.

Drawing on a study he had recently conducted for Halifax’s Ecology Action Centre, Torrie illustrated why mass deep energy retrofit campaigns will prove so critical to the overall success of the energy transition. When the Centre approached Torrie to undertake the study, it asked a bold question: “What would it take for Nova Scotia to build an electricity system that is at least 90% carbon-free by 2030?” The model he developed would also have to account for the burgeoning growth of electric vehicles and grid-powered space heating.

Reaching a 90% carbon-free target by 2030 was ambitious in any context, but Nova Scotia represented a particular challenge, with more than 50% of its electricity currently supplied by coal-fired power stations, Torrie told the participants in Ottawa. As he modelled different scenarios, it became clear that retrofitting the building stock would be necessary to make electrification and a transition to a renewable energy grid tangible possibilities—in fact, there wasn’t a single model that could reach the target without a substantial increase in the energy efficiency of existing residential buildings.

But Nova Scotia would not need to go as far as achieving a universal Passivhaus standard: According to Torrie’s models, it would be sufficient to reduce average thermal energy consumption by 50%. Simply by employing a retrofit strategy that used increased insulation, high-performance windows and air sealing, heat pumps, and moisture management systems, the province would put itself in position to achieve carbon neutrality by the close of the decade.

The Nova Scotia scenario has implications for energy transition strategies across Canada, and speaks eloquently to Ottawa’s plans. But Torrie said there’s a lot of capacity-building to be done, since the city will need to close a major skills gap to get mass, deep retrofits rolling. An additional 5,000 skilled workers will have to be trained to achieve the goal of retrofitting 10,000 to 15,000 houses per year—a surmountable challenge, said Torrie, and an historic opportunity to implement a resilient, low-carbon solution that also acts as an engine of job creation and inclusive growth.

The other side benefits of a low-carbon energy transition show that such a future will not be defined by scarcity, lack, or discomfort, Torrie added. He listed healthier homes, lower energy bills, and better communities as key examples, adding that one of the major reasons municipalities have emerged as leaders in this area is that mayors, councils, and grassroot campaigners have been quick to grasp that energy transition and climate action represent “integrative problems”: by tackling them together, communities can capture multiple benefits in other areas.

Even though they’ve had little mandate to address climate change directly, many municipalities have been moving forward on the issue since the 1990s. Yet, Torrie said, none of the hundreds of projects he has been directly involved with actually labelled themselves as climate change initiatives. In almost all cases, they were presented as community development or job creation programs. One Chicago city councillor sold climate action as a crime prevention effort.

Tackling the question of how to pay for a wide, deep building stock retrofit, Hagen cited low-interest retrofit funds from Canada Mortgage and Housing Corporation and funding from the Federation of Canadian Municipalities for municipally-led programs, on top of the $3 billion in energy investment and $2.9 billion in renovation spending that already occur in Ottawa every year. She said the city is looking for volunteer “retrofit champions” to help coordinate a community-led approach in their own neighbourhoods.

No it wasn’t, David, but here’s an older presentation on a mass, deep retrofit pilot in Windsor, Ontario. The calculations are a decade old and conditions of changed, but it turns out the potential was shining through even then. [2]