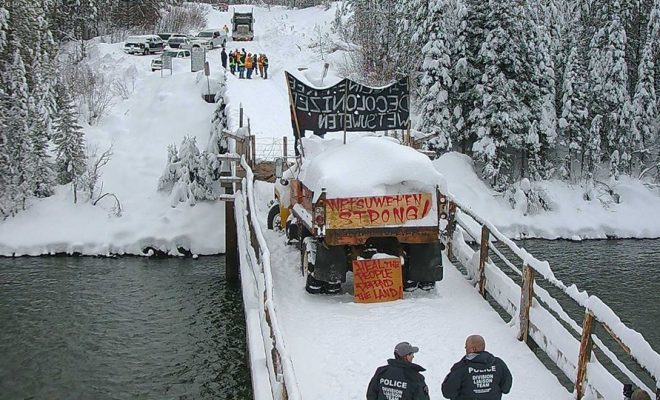 The company behind the contested Coastal GasLink pipeline through unceded Wet’suwet’en territory in northeastern British Columbia has agreed to pause construction for two days to “facilitate” preliminary negotiations between hereditary chiefs and the governments of Canada and B.C.

“The chiefs agreed to the meeting after TC Energy said it would stop work in the Morice River area near Houston, B.C.,” CBC reports [1], citing a statement by hereditary chief Na’Moks (John Ridsdale). “RCMP have also agreed to stop patrols on the Morice Forest Service Road while the meeting is under way, a statement confirmed.”

“The Wet’suwet’en hereditary chiefs thank our supporters for their tireless dedication and now the chiefs need time to have discussions with B.C. and Canada in an atmosphere of wiggus (respect),” the Office of the Wet’suwet’en said yesterday.

CBC said the “long-sought” meeting was to take place in a hotel in the northwestern town of Smithers, B.C. Crown-Indigenous Relations Minister Carolyn Bennett arrived yesterday morning, and provincial Minister of Indigenous Relations and Reconciliation Scott Fraser was expected in the afternoon, following a budget vote in the provincial legislature.

“We are very interested in working with them on the issues of rights and title and the kinds of things that really will matter to the future of the nation,” Bennett told media after she arrived. “I’m very interested in accelerating that work.”

“Finding a peaceful resolution to the situation we’ve found ourselves in over the last weeks is key and paramount, but it is deeper than that,” Fraser added, before departing Victoria. “The issue of rights and title—we are committed with the Wet’suwet’en people to get that straightened out and to be able to recognize those.”

CBC said the two days of talks are preliminary, and further meetings will depend on how the initial round goes. But the stakes are getting higher by the day. “Rail and road blockades have sprung up across the country for weeks as a show of support for the Wet’suwet’en hereditary chiefs who oppose the C$6.6-billion pipeline project,” the national broadcaster notes, with dozens arrested so far. “The wave of solidarity began after RCMP arrested a number of people on Wet’suwet’en territory earlier this month for violating an injunction by blocking Coastal GasLink construction.”

Before the negotiations could even convene, B.C. apparently informed the Office of the Wet’suwet’en the meeting had been cancelled, before walking back the statement and calling it a “miscommunication”.

“Miscommunication, I don’t know how that would happen,” Na’Moks said. “Our executive director was called and given that message, and no reasoning why it was back on.” But “we’re pleased with having the talks back on. Our willingness has always been there.”

Coastal GasLink said it had agreed to the two-day pause to “facilitate” discussions. “We fully support the efforts of all parties and are committed to finding a peaceful resolution to the current issues,” the company said in a statement.