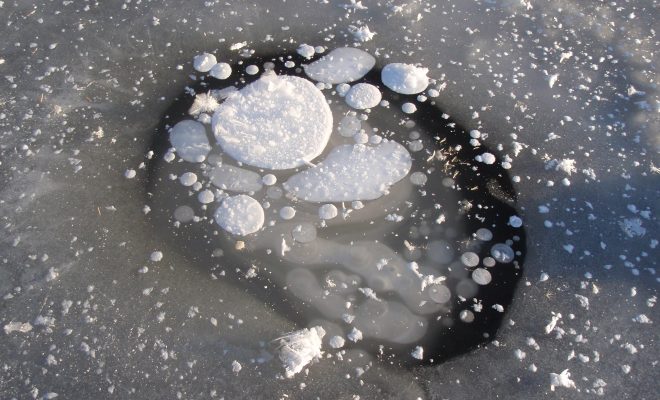 Governments and scientists are underestimating methane leaks from oil and gas operations by 25 to 40%, meaning that tens of millions of tons of a greenhouse gas more than 80 times as potent as carbon dioxide may have gone unaccounted for, according to a contentious new study [1] published Wednesday in the prestigious journal Nature.

The research finding points to “both a threat and also an opportunity to curb leaks of the hard-hitting molecule,” the Washington Post reports [2]. The study, led by University of Rochester post-doctoral researcher Benjamin Hmiel, attributes less of the world’s known atmospheric methane to natural sources, so that correspondingly more traces back to human activity.

“What we’ve previously categorized as natural methane emission must be anthropogenic sources, the most likely being fossil fuel use and extraction,” Hmiel said.

“We’ve identified a gigantic discrepancy that shows the industry needs to, at the very least, improve their monitoring,” he added [4]. “If these emissions are truly coming from oil and gas extraction, production, and use, the industry isn’t even reporting or seeing that right now.”

The study method “draws on samples of ancient air extracted from within the Greenland ice sheet to measure levels of atmospheric methane before humans started burning fossil fuels,” the Post explains. “Surprisingly, these air pockets, dating back as far as the 18th century, contained very little of the oldest type of methane—multi-million-year-old fossil methane gas, which originates from deep within the crust of the Earth. This suggests that in its natural state, the planet just doesn’t belch out much fossil methane from geological sources, such as undersea seeps and towering mud volcanoes.”

But even so, “the Earth’s atmosphere today is full of ancient, fossil methane. This would seem to imply that the reason is, overwhelmingly, human exploitation of fossil fuels—and that these emissions could be 25 to 40% larger than previously thought.”

Cornell University Earth system scientist Rob Howarth, whose lab did much of the initial work to document methane releases from natural gas fracking, said the latest study is consistent with past research linking about one-third of the global methane increase to North American gas production over the last decade. “Emissions from fossil sources are correspondingly larger than many have been estimating,” he told the New York Times. “I find it very convincing.”

Harvard atmospheric scientist and methane expert David Jacob, who was not involved with the study, reinforced the value of the research but rejected its conclusion. The study produced an “important result, because the current estimates for the methane geological source were widely considered too high by atmospheric modelers such as myself,” he said. But “I totally disagree with this inference” that fossil fuel emissions have been neglected—Jacob’s conclusion is that if naturally-occurring methane levels are lower, overall atmospheric levels should be, too.

“The new research suggests that circa 1750, not long before industrialization began, natural fossil methane sources were contributing only about one million to five million tons of methane to the atmosphere each year,” the Post writes. “In contrast, current methane budgets put that total much higher, in one recent case attributing 45 million tons of annual emissions to such ‘geologic’ sources.”

That gap “explains why the current study suggests that fossil fuels, rather than natural geological venting, must be unleashing the missing fossil methane.”

But while those details are being sorted out, the Post points to oil and gas emissions as an opportunity for a quick win on overall greenhouse gas reductions. “There may be under-reporting, there may be leaks that are simply undetected and unknown to the industry as well,” said University of Rochester professor Vasilii Petrenko, a co-author of the latest study. “These are the types of things that I think could cause us to underestimate.”

Canada’s GHGSat could help with that! GHGSat.ca

The article is an extract of the Washington Post article but misnames the Harvard professor, Daniel Jacob. The controversy over agriculture vs. fossil source increases was largely settled by NASA in 2018 [5] in favour of fossil so thee should be little doubt that Jacob’s earlier findings that more than as much as 60% of the rise in global methane emission rates are due to North American fracking. Even if the industry were to halve fugitive emissions, the continued expansion of operations would leave the world well above 1.5 C in short order. Each new well, orphaned or not, will add to post production leaks and the delivery losses will be unabated as long as we use gas.
There is no reasonable compromise – gas must be phased out and fast.