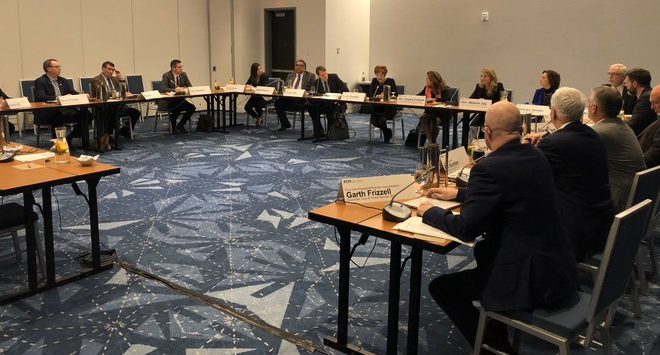 The meetings were to “touch on building a stronger federal-municipal partnership and cooperation,” Freeland’s office told [1] iPolitics.

The FCM’s Western Economic Solutions Taskforce (WEST), co-chaired by Yorkton, Saskatchewan councillor Randy Goulden and Saskatoon Mayor Charlie Clark, “was established in November after the previous month’s federal election saw the Liberals lose all of their seats in the oil-rich provinces of Alberta and Saskatchewan,” the Ottawa-based publication states. “It was presented as a new avenue that would allow municipal leaders to appeal directly to the federal government amid the prolonged economic downturn gripping the region.”

At the time, FCM President Bill Karsten said his organization was “perfectly situated to take on the role of ‘bridge-builder’ between affected western communities and Ottawa because of its history as the preeminent platform for local governments in Canada, and because municipalities in that region are at the ‘forefront’ of the economic crisis,” iPolitics adds.

“We all know that currently there are issues in many of the provinces out west, particularly the Prairie provinces, and those issues have led to serious economic instability,” Karsten said. “Many of the communities that we represent are, in fact, we believe paying the price in terms of the economic downfall that’s certainly affecting those provinces in the west, but we believe right across the country.”