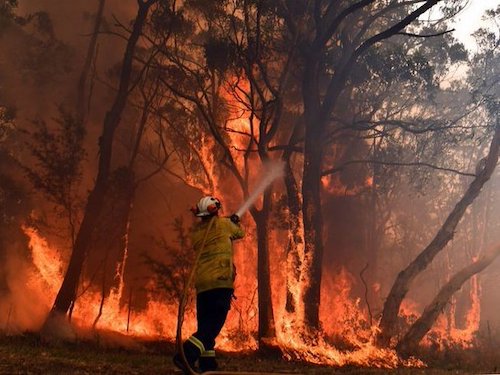 Hot, dry, windy conditions in the Australian state of New South Wales have given way to torrential rains that have reduced the number of active bushfires from 60 to 42, but raised the prospect of flooding and landslides for parts of the country’s east coast.

The Guardian says [1] Sydney now faces one of its “wettest three-day periods” in years.

“This has been an absolute welcome disruption to that weather pattern and a massive reprieve and relief to so many people right across New South Wales,” said NSW Rural Fire Service (RFS) Commissioner Shane Fitzsimmons. “Obviously, we don’t want to see lots of widespread damage and destruction from flooding, but it is certainly a welcome change to the relentless campaign of hot, dry weather resulting in widespread damaging, destructive fires that we’ve experienced for too long now.”

With 17 of the remaining 42 bushfires still burning out of control, the RFS “is taking advantage of the conditions to strengthen containment lines and, where possible, conduct back-burning operations,” The Guardian reports. So far, most of the precipitation has shown up in the north and northeastern parts of the state, with rain gradually moving toward the southeast.

On Friday, Australia’s Bureau of Meteorology said Sydney could expect 60 to 90 millimetres of rain, its heaviest 24-hour downpour since 2018, followed by up to 200 millimetres Saturday and 150 Sunday. “Coastal areas of NSW, including Sydney, could receive their highest rainfall levels in more than three years as a trough makes its way down the state,” The Guardian writes. “Multiple severe weather and flood warnings were in place across NSW on Friday, with emergency services warning of possible land slips in areas near fire grounds cleared of vegetation.”

The Bureau said weather conditions could translate into “destructive winds, torrential rainfall, and rough seas” along the coast. “Mitchell Harley, a coastal researcher at the University of NSW, said 5.5-metre waves forecast for high tide on Sunday morning in Sydney could potentially replicate conditions similar to the 2016 east coast low [3], when parts of houses in the northern beaches suburb of Collaroy were destroyed [4] and large sections of the beach were washed away,” The Guardian adds.

The heavy rainfall is also raising concerns about water contamination from ash and silt. “Increased run-off could also lead to flash flooding and land slips, which may block access trails and roads in some areas,” the UK-based paper says. “WaterNSW has been monitoring areas around the Warragamba Dam, the source of 80% of untreated supply for greater Sydney. Two silt curtains designed to trap material that could pose a risk to water quality have been in place since January.”