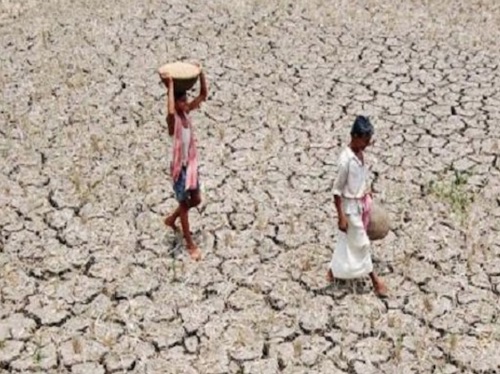 Late 2019 saw the calamitous rise of both dengue fever in Honduras and hunger in Zimbabwe, events that demonstrated how government dysfunction, poverty, and political and economic turmoil leave both public officials and citizens unable to respond adequately to the accelerating impacts of the climate crisis.

“More than 400 people died this year as one of the worst dengue epidemics on record swept through Central America,” the New York Times reported [1] in late December, with researchers and public health officials warning that such events will likely “become more frequent and more widespread” as the planet warms and mosquito-friendly habitat expands.

That Hondurans comprised more than 40% of those who died from dengue fever in Central America in 2019, the Times notes, owed in part to how climate effects in the country have created ideal breeding grounds—literally—for the Aedes mosquito [3], which carries the dengue virus and can transmit it to humans.

The Times describes how the country’s painful lurches between periods of devastating drought and deluging rain “created conditions that, in the absence of a strong governmental program of disease control, has allowed dengue to flourish.”

Some of the specific conditions noted by the Times are that “during periods of extreme drought, residents living in neighborhoods without a reliable public water supply—as is the case in much of Honduras—will sometimes store water in their homes, providing more potential mosquito breeding sites. And during heavy rainfall, flooding can provide more breeding environments, particularly in areas with poor drainage systems.”

But the spread of dengue in Honduras—which the Times describes as particularly “brutal,” especially in its northern province of Cortés, the country’s industrial heartland—traces back to more than the climate crisis, with ecosystem impacts being “compounded by government dysfunction, political tumult, and public apathy.”

Attesting to this reality, Eduardo Ortíz, an advisor on sustainable development and environmental health for the Pan American Health Organization in Honduras, told the Times that “the cure for dengue is political.”

The 2019 dengue outbreak coincided with violent street protests against President Juan Orlando Hernández, with some of the protests “driven by fears the government planned to privatize the health and education sectors.”

When the steady erosion of public services is not sending angry citizens out into the streets, it contributes to a paralyzing apathy, or emotional exhaustion, which Honduran public health officials described as “an enduring problem throughout the epidemic, particularly among poor, vulnerable populations.”

“People are thinking about other problems,” Nolasco explained. “If I’m a mother and I have three children, four children, I’m going to be thinking about what I’m going to feed them, whether my son is running with the gangs,” and “they’ll be thinking least of all about dengue.” She recalled how, on a return visit to a family that had lost a child to dengue, she found a basin of water full of “hundreds of mosquito larvae swimming around.”

A similar tragic convergence of climate chaos and political and economic turmoil erupted in Zimbabwe last year, and continues today.

In a report it published just a few days before its piece on dengue in Honduras, the Times notes [4] how “a combination of government dysfunction, an economic meltdown, droughts, and a calamitous cyclone [5] this past March hurtled Zimbabwe toward a hunger disaster that has become the most severe in southern Africa, and among the most alarming in the world.”

According to Hilal Elver, an independent United Nations human rights expert on food security, 60% of people in the country are now “food-insecure, living in a household that is unable to obtain enough food to meet basic needs,” the Times writes.

As with dengue in Honduras, growing food insecurity (and fear of famine) owes in significant part to climate change, “with Zimbabwe’s last maize harvest down by half compared with the year before because of drought,” and the forecast for the next harvest looking dire in a country “once known [6] as the continent’s breadbasket.”

But again, as with Honduras, political dysfunction and the corresponding economic turmoil are compounding the trauma of climate impacts, with Zimbabwe’s annual inflation currently the world’s highest, at 300%.

With local currency drastically devalued, levels of hunger once known only in rural areas are spreading to the cities.

And  just as in Honduras, the conjunction of ecological meltdown and political collapse in Zimbabwe is bitter. Ursula Mueller, United Nations deputy emergency relief coordinator, described the “negative coping mechanisms” that evolve as “drought begets less food, which in turn begets declines in health and education and increases in crime”. After visiting Zimbabwe in June, she told the Times: “This is not just a food crisis. It is a wider more complicated situation” in which “people have to make choices: Do I seek HIV treatment or food?”