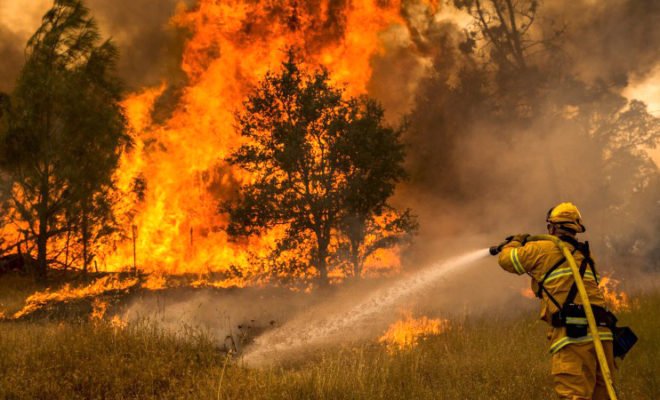 The report echoes the warning from the UN Intergovernmental Panel on Climate Change (IPCC) that humanity has only a decade left to confront the climate crisis, prompting WEF President Børge Brende to express “grave concern” for the consequences of continuing environmental degradation.

“The political landscape is polarized, sea levels are rising, and climate fires are burning,” he said. “This is the year when world leaders must work with all sectors of society to repair and reinvigorate our systems of co-operation, not just for short-term benefit but for tackling our deep-rooted risks.”

Brende added: “The good news is that the window for action is still open, but not for much longer. And, despite global divisions, we continue to see members of the business community signal their commitment to looking beyond their balance sheets and towards the urgent priorities ahead.”

The WEF report “highlighted some of the severe economic impacts climate change poses,” Yahoo notes. “For example, 200 businesses estimated that it would cost them a combined US$1 trillion if there’s no action on the issue. The report also cited the possibility of a ‘2008-style systemic collapse’ unless human-caused carbon dioxide emissions fall by 50% by 2030 from 2010 levels, and reach net zero by 2050.”

The release also points to the “economic opportunity to come up with solutions and alternatives,” Yahoo notes.

“Reaching these targets will require serious, interconnected economic and societal transitions at macro and micro levels that depend on technological innovation and commitment from governments and businesses,” the report stated. “So far, however, commitments are inadequate given the urgency of the challenge, and current trends are not encouraging.”