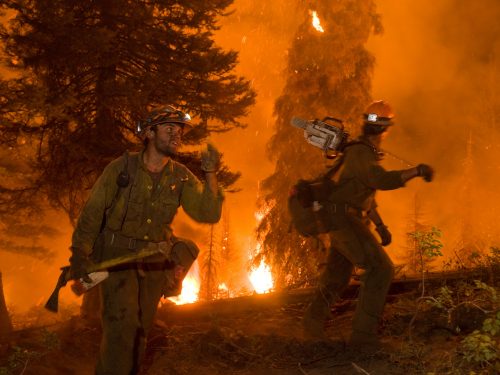 Bankrupt utility giant Pacific Gas & Electric (PG&E) has reached a tentative US$13.5-billion settlement with the victims of devastating wildfires that killed dozens and destroyed tens of thousands of homes across its Northern California service area.

The agreement “will cover claims stemming from some of the deadliest and most destructive fires in the state’s history, including the 2018 Camp Fire and the 2017 Tubbs Fire,” the Washington Post reports [1]. “The massive settlement could compensate tens of thousands of victims who have had to recover and rebuild after losing homes, businesses, and loved ones in the blazes. It would also mark a step forward in the beleaguered utility’s attempts to emerge from bankruptcy in the coming months.”

The deal won’t be final until a federal bankruptcy judge approves it.

“PG&E has faced waves of criticism over its response to the string of wildfires that have ravaged the state in recent years,” the Post says. “After fire investigators determined the utility’s equipment was involved in some of the blazes, PG&E started pre-emptively cutting power [3] to millions of customers during intensely dry, windy weather, infuriating residents and leading politicians to propose a public takeover of the company.”

Earlier this year, fire investigators blamed the utility’s equipment for sparking the 2018 Camp Fire [4], which killed 86 people, covered more than 150,000 acres, and literally burned Paradise to the ground [5]. The Post says PG&E agreed with the fire officials’ assessment.

Now, “we are pleased that PG&E has finally admitted that the victims’ losses exceed $13.5 billion, and that PG&E is responsible,” said BakerHostetler lawyer Robert Julian, representing the victims.

“There have been many calls for PG&E to change in recent years,” PG&E President Bill Johnson said in a statement Friday. ““We recognize we need to deliver safe and reliable energy service every single day—and we’re determined to do just that.”

The utility’s proposed $30-billion bankruptcy plan included a new name, Golden State Power Light & Gas Co., as well as a compensation fund for victims, when PG&E unveiled [6] it in July.

Last week, PG&E said the compensation agreement, the third it has concluded this year, “would put it on a path to emerge from bankruptcy by June 30, the deadline to participate in a fund created by the state legislature that California utilities will use to pay for future wildfires linked to their equipment,” the Post writes. “Even if the settlement is approved, however, PG&E will still have to reconcile with a frustrated and distrustful public and government officials who want to rein the company in.”

That list begins with more than two dozen local officials, representing about five million Californians, who’ve asked the state utilities commission to replace PG&E with a customer-owned co-op. “PG&E, as we know it, cannot persist and continue,” said Gov. Gavin Newsom, who’s received hundreds of thousands in campaign contributions from the utility and its employees, in a November news conference. “Everybody objectively acknowledges and agrees with that. It has to be completely transformed.”