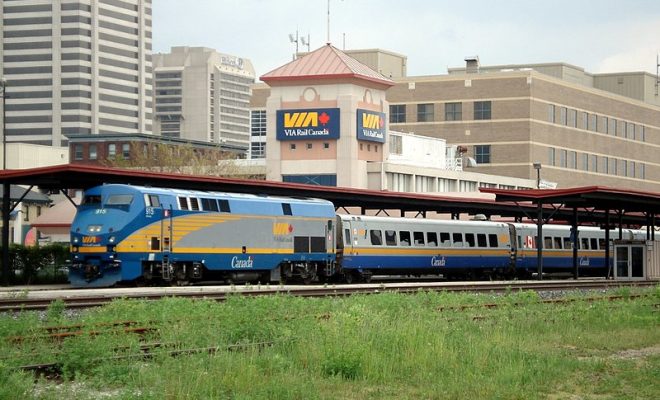 Via Rail and the Canada Infrastructure Bank have set a March 31, 2021 deadline for final engineering for a high-speed passenger rail line along the Toronto-Quebec City corridor.

The project would require federal cabinet approval after engineering was complete, the Globe and Mail reports [1]. The railway and the infrastructure bank are looking to hire an engineering team by December 19 to get the work done.

“The search for help comes as Via, an independent Crown corporation, launches a new marketing campaign for its plan, which it calls ‘high-frequency rail’,” the Globe states. “Via’s promotional materials—including a video and an updated map—promise that dedicated passenger tracks ‘would completely change the way we travel’.”

The cornerstone for that promise is that “passenger trains that no longer have to share rail lines with freight traffic could travel as fast as 177 kilometres an hour,” the Globe explains. “Via says this could reduce travel time from Ottawa to Toronto to three hours and 15 minutes, compared to the current four hours and 30 minutes, ‘an experience that’s better than driving’.”

Past studies have put the cost of the project at C$4 to $6 billion, depending on whether the line was electrified. The engineering team will be charged with updating those estimates.

While the plan has not yet received federal approval, the Globe says Transport Canada and the infrastructure bank participated in an announcement last June that earmarked $71.1 million to continue the project. “The proposed engineering work would involve deciding how Montreal’s light rail system and Via could share the Mont-Royal tunnel into the city,” the paper adds. “Whether that is possible has been a source of tension between proponents of the two projects.”

Similarly, the engineers will look at how a new intercity rail system would dovetail with commuter rail in the Greater Toronto Area. They’re to select a final route by March 31, 2020, after looking at tight curves along the rail line and station design at cities along the route, including Montreal, Toronto, and Peterborough.

University of British Columbia civil engineer Alan Russell, a specialist in public-private partnerships, told the Globe the March 2021 deadline to complete the engineering work is “doable” but tight. “What seems to be preordained is that some version of the project will go ahead,” he said.