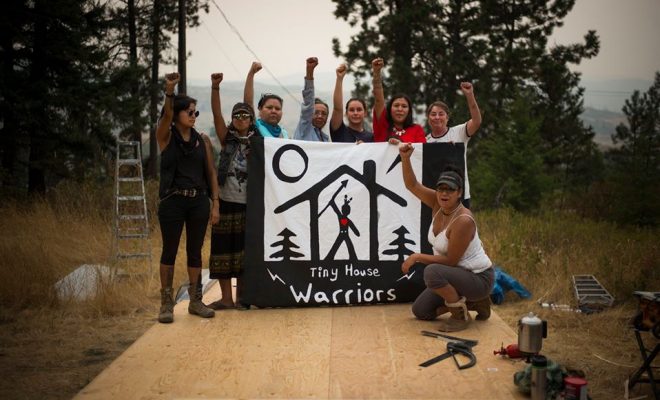 In a move that legal experts are condemning as a disquieting disregard for the democratic rights of assembly and free expression, federally-owned Trans Mountain Corporation has been conducting surveillance on its opponents, trolling their social media posts, and exchanging intelligence with the RCMP.

Trans Mountain is also labelling certain activists as “persons of interest” (POI), a police term used to designate individuals who have some connection to a crime (for example, as a witness) but who are not suspects, CBC reports [1].

The revelations about Trans Mountain’s actions, especially in response to anti-pipeline protests in south-central British Columbia through December 2018, are contained in some 55 pages of partially-redacted documents released to Joe Killoran, lawyer for Secwepemc First Nation activist Kanahus Manuel.

Manuel is a chief spokesperson for the Tiny House Warriors, a group of Indigenous activists who set up two tiny house camps near Kamloops, on Secwepemc territory, in the path of the pipeline’s designated route. She told CBC the opposition to the pipeline runs “much deeper than what surfaces on social media,” adding that “a lot of the underground is getting prepared and is getting strong culturally, spiritually, physically, mentally, emotionally.”

The Trans Mountain documents released to Killoran are primarily “activity reports” that “contain social media information, along with short commentaries on anti-pipeline social media  chatter on Facebook and Twitter, planned demonstrations, along with analysis and descriptions of the situation on the ground,” the attorney told CBC. The documents are striking for their overt hostility, he added.

One example was a commentary appended to a copy of a Greenpeace Canada tweet in support of Tiny House Warriors who had been arrested following a Trans Mountain protest in Kamloops. Describing the protest as “a publicity stunt that will be used to gain attention for the group and for Greenpeace,” Trans Mountain security officials went on to denounce the arrests—which were video recorded, then widely shared—as part of a campaign to “gain sympathy from Indigenous people in order to build support and legitimize their own campaigns.”

The security officials “seemed to perceive [the activists] as the enemy who needed to be spied on or checked on, even though they didn’t have any evidence of anything being illegal,” Killoran said.

Although Trans Mountain is now a Crown corporation and accountable to Parliament, the company “would not say what it does with the names it gathers in its reports or how it determines someone to be a person of interest,” CBC writes. “Nor would it answer questions on whether it shares this information with other federal departments or the RCMP.”

In an email statement that identified employee and public safety as its first concern, Trans Mountain wrote that it is “aware of publicly-available commentary, including posts on social media related to the industry, our operations, and the expansion project.”

But Carleton University criminologist Jeffrey Monaghan, co-author of a book on policing of Indigenous movements, warned against accepting those reassurances. He told CBC the newly-released documents raise “all kinds of questions about what it means to have rights of expression in a democracy.”

Drawing parallels between the data in the Trans Mountain “activity reports” and the information-gathering during the Idle No More protests of 2012-2013, Monaghan said some of the Trans Mountain material—including details of the movements of individual activists—could not have originated online.

As an example, he cited a Trans Mountain incident report revealing how the company and the RCMP discussed security plans for a December, 2018 protest at Thomson River University in Kamloops. “This data is travelling,” he said, showing that Trans Mountain, “a non-policing entity”, is involved in “doing all kinds of surveillance and data accumulation that is patched in to the policing establishment”.