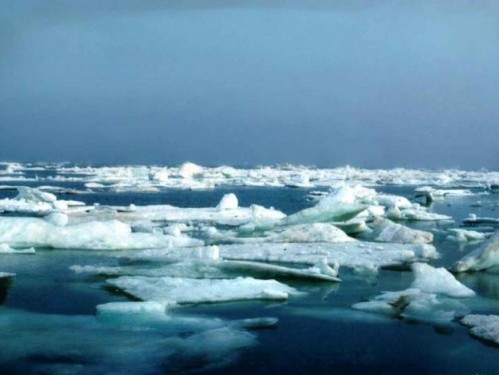 Treacherously thin ice, arriving very late, is one of the immediate impacts of the shockingly warm temperatures this autumn across much of the far North, reports The Canadian Press.

Between September 1 and November 1, 100% of the daytime temperatures in Inuvik, Northwest Territories were above normal. Further east in Cambridge Bay, and in Pangnirtung, Baffin Island, the proportion was 80%. And “above normal” means considerably above, CP writes [1]: The mercury was 6.0°C higher than normal on the northern tip of Ellesmere Island one day in September, and 11°C higher in Pond Inlet on another.

Such abnormally high temperatures have had a devastating effect on the development of sea ice, with the U.S. National Oceanic and Atmospheric Administration finding that ice cover in October was “32% below the 1981-2010 average”, placing it at its lowest since record-keeping began in 1979.

The result has been far too many close calls, including several in Cambridge Bay, when travellers on snowmobiles fell through ice that in earlier years would have been reliably and safely frozen solid.

Cambridge Bay fire chief Keith Morrison, who hauled four people out of icy water this fall, reported other strange events occurring in tandem with the rising temperatures: more killer whales, and insects never seen before, and therefore without known names.

“A lot of people are noticing that the ice is not what it used to be,” he told CP.