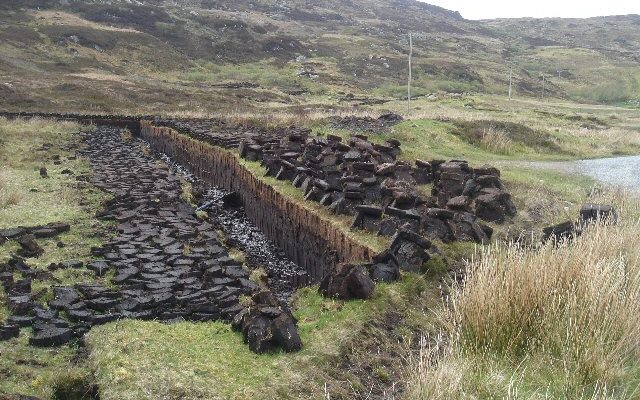 As part of its pledge to achieve net zero emissions by 2045, Scotland has begun an ambitious program to restore its degraded peatlands, stating that the boggy ecosystems, which at present cover 3% of the planet’s surface, store twice as much carbon as all of its forests combined.

Found “mostly in northern Europe, North America, and Southeast Asia,” reports [1] Deutsche Welle, peatlands (also known as bogs, swamps, and mires) are particularly prevalent in Scotland, accounting for about 20% of its land territory, or about 1.7 million hectares.

According to current government estimates, however, nearly 30% of Scottish bogland is badly degraded, thanks to a combination of past land use practices and an exploding deer population.

While efforts to turn the region’s peatlands into farmland by draining away the water “date back to Roman times,” writes DW, the process accelerated in Scotland in the 1950s “with the advent of new machinery and government grants aimed at improved grazing”.

While climate change was not yet on anyone’s horizon [not even Exxon’s, as far as we know—Ed.] in the 1950s, “without the bogs’ acidic water there to preserve them, the dead plants in the peat start to degrade, releasing their carbon into the atmosphere as carbon dioxide,” the newspaper explains. Such degradation “is sped up by the sun and wind they are exposed to without their water coverage.”

Further adding to the degradation of Scotland’s peatlands was a UK government program, in operation through the 1980s, that offered tax incentives to landowners who first drained their bogs, then planted trees. This initiative proved a “double hit” for the bogs, as “first drainage dried the land and then the trees sucked out even more of the moisture,” DW adds. “Although the trees absorbed carbon as they grew, that didn’t cancel out the amount of carbon released into the atmosphere by the peatlands’ destruction.”

With the UK tax incentives now history following protests by conservationists, and with the Scottish government offering US$18 million in grants this year alone to landowners who “block the drainage ditches their predecessors were encouraged to dig,” hopes are high that “50,000 hectares will have been restored by the end of 2020, and 250,000 hectares by 2030”.

Andrew McBride of Scottish Natural Heritage said the change in rewatered peatlands is stark: mosses return within two years, and the bogs themselves regain their full function in five to 15.

Also aiding in the reclamation of Scotland’s mires are efforts to keep the deer population in check, mostly by culling older animals. In the absence of natural predators, DW says, deer remain something of a nuisance species, and are a lethal threat to the peatlands, trampling whatever bogland plants they do not eat.

Scotland’s efforts at peatland restoration are being emulated elsewhere in the world, DW reports, citing a South African initiative that “has created 15,000 jobs in rewetting and controlling the erosion of 20 bogs” across the country.

While 1990 saw the last of major peatland drainage projects in Europe, such destruction “continues elsewhere” in the world, with the bogs of Uganda and Peru being “increasingly drained for agriculture”. And ongoing demand for palm oil means that “Malaysia and Indonesia now account for half of the world’s peatland emissions.” The draining of these tropical bogs is “leading to frequent wildfires,” notes DW.

But in Scotland, “we want to do things as quickly as possible, because obviously there’s a climate emergency,” McBride said.