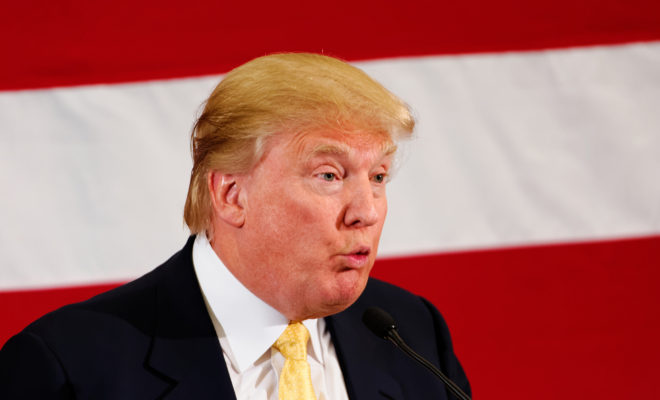 Donald Trump filed formal notice this week that the United States will withdraw from the 2015 Paris Agreement. But the decision doesn’t take effect until the day after next year’s presidential election, Trump’s successor will be able to rejoin the agreement on 30 days’ notice—and analysis shows the former reality TV star has failed to completely derail his country’s progress on greenhouse gas reductions.

After years of Trump declaring Paris a “total disaster”, Secretary of State Mike Pompeo announced on Monday—the three-year anniversary of the landmark deal, and the first day any signatory could step away—that the U.S. had formally notified the United Nations of its plans to quit the agreement. That decision “will leave the world’s second-largest emitter of greenhouse gases as the only nation to abandon the global effort to combat climate change,” the Washington Post reports [1].

“Should a Democrat win the White House, the nation could re-enter the agreement after a short absence—as numerous candidates have pledged,” the Post adds. “But if Trump prevails, his re-election would probably cement the long-term withdrawal of the United States, which was a key force in helping forge the global effort under President Barack Obama.”

“Trump’s hostility toward collective global efforts to curb emissions—and progressive environmental policy writ large—puts him at odds with some of the U.S.’s leading companies, which recognize the long-term effects to their own bottom line [3] posed by climate change,” adds [4] foreign affairs reporter Ishaan Tharoor, author of the Post’s daily WorldView blog. “Recent polling also shows that a significant majority of Americans believe Trump is doing too little to tackle climate change, while about eight in 10 Americans now believe that human activity is fuelling global warming.”

In his statement, Pompeo replaced that kind of diplomacy with untethered overstatement.

“In international climate discussions, we will continue to offer a realistic and pragmatic model—backed by a record of real world results—showing innovation and open markets lead to greater prosperity, fewer emissions, and more secure sources of energy,” he said. “We will continue to work with our global partners to enhance resilience to the impacts of climate change and prepare for and respond to natural disasters.”

“Abandoning the Paris agreement is cruel to future generations, leaving the world less safe and productive,” countered [5] World Resources Institute President and CEO Andrew Steer. “It also fails people in the United States, who will lose out on clean energy jobs, as other nations grab the competitive and technological advantages that the low-carbon future offers.”

“Donald Trump is sending a signal to the world that there will be no leadership from the U.S. federal government on the climate crisis—a catastrophic message in a moment of great urgency,” said [6] 350.org [7] Executive Director May Boeve. But “while the Trump administration relentlessly works to roll back efforts to confront climate breakdown, even as wildfires and climate impacts rage, the majority of people in the United States understand the need to address this crisis head-on.”

“Trump has made it clear that he is going to continue to put the wants of large corporations and fossil fuel executives above the lives and futures of our generation,” said 19-year-old Future Coalition Executive Director Katie Eder. “We’re asking that elected officials at all levels maintain commitments to the Paris Climate Agreement and end the fossil fuel era once and for all. We will continue to strike, rally, and march so that public officials hear that message.”

But while Trump’s Paris withdrawal and massive rollbacks of domestic climate policy will make U.S. greenhouse gas output at least 3% higher in 2030, Climate Action Tracker says [8] it’s still projecting emissions that are 2% lower than it expected when Trump entered the White House—and 13% below 2005 levels.

“Trump has not stopped the fast decline of coal-fired power and the rise of renewables,” the organization states. “Indeed, despite the weakening of the Clean Power Plan, the U.S. power sector looks set to overachieve the CPP’s emissions reduction goals.”

The release adds that “the Administration’s activities also significantly affect greenhouse gas emissions outside the U.S. through boosted gas exports. However, fears that it would lead to an avalanche of countries withdrawing from the Paris Agreement have proven unfounded.”

At the Natural Resources Defense Council, Energy and Transportation Program Director Kit Kennedy stresses that Trump can’t derail state and local action to reduce emissions. “On its face, the withdrawal move cedes U.S. leadership on climate to other countries and punctuates the short-sightedness of an administration that consistently prioritizes polluters over people,” she writes. “But Trump cannot disrupt the striking momentum seen in states and cities across the country that are taking up this mantle and both moving toward cleaner, more affordable energy and making progress toward meeting the U.S. Paris carbon reduction agreement goals.”

At a major trade fair in Shanghai, speaking right after a keynote address by Chinese President Xi Jinping, French President Emmanuel Macron said cooperation between Europe and China will be “decisive” in addressing the climate crisis.

“If we want to be in compliance with the Paris Agreement, we will need next year to enhance our commitments to reduce emissions, and we must confirm new commitments for 2030 and 2050,” Macron said [9]. A French official said Trump’s announcement “only makes the Franco-Chinese partnership on climate and biodiversity more necessary,” adding the two leaders would be signing an agreement that included a paragraph on “the irreversibility of the Paris Agreement”.

Trump’s bid to derail the Paris deal brought a slightly different focus to a presidential primary that is just beginning to heat up ahead of Iowa caucuses in February. The New York Times says [10] the announcement may motivate the contenders for the Democratic nomination “to use the existential threat of climate change to motivate voters”—particularly “young voters, who will live to see its worst effects and are a key part of the Democratic base.”

“Iowans cannot ignore this issue—they’re forced to face it every spring and every winter,” said Misty Rebik, Iowa state director for Sen. Bernie Sanders (I-VT). “So we’re prioritizing those concerns, and prioritizing them by providing a sense of hope and optimism.”

Iowa “is also home to a large wind power industry, and Sanders campaign officials said they planned to emphasize what Iowans could personally do to help combat climate change,” the Times adds.

“We need to be strengthening our response to climate change—but Trump and his administration are running away from our responsibilities. I’ll move to rejoin the Paris Climate Agreement on day one of my presidency,” tweeted candidate Elizabeth Warren (D-MA).

“A country that ignores the threat to the very survival of this planet isn’t just troubled—it’s morally bankrupt,” added [10] former vice president Joe Biden (D-DE). “We must get the climate change denier out of the White House and take urgent action to address the climate emergency.”

“I actually see an opportunity in this, as bad as it has gotten, with both how close we are to catastrophe in climate and the disappearance of U.S. leadership from the world stage,” said South Bend, IN Mayor Pete Buttigieg. “I also see in that the opportunity to do something important, which is, restore American credibility.”

On Tuesday morning—363 days before the November 3, 2020 vote—a Washington Post-ABC News poll had [11] Trump trailing all five Democratic frontrunners, and 58% disapproving of the current White House occupant’s job performance. The poll showed margins of victory of 17% for Biden, 15% for Warren, 14% for Sanders, 11% for Buttigieg, and 9% for Sen. Kamala Harris (D-CA). A series of surveys commissioned by the Times showed [12] Biden leading Trump in four out of six swing states, Sanders leading in three, and Warren ahead in one and tied with Trump in two others.