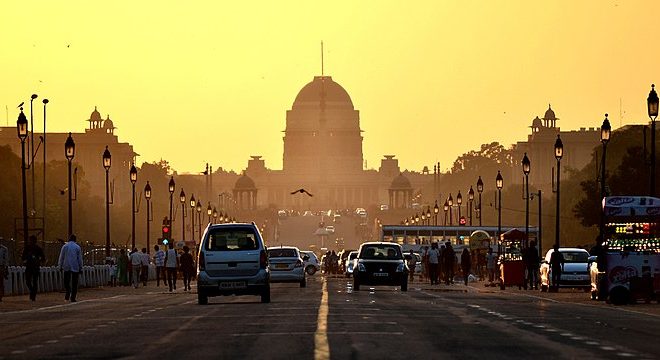 India’s capital, New Delhi, declared a public health emergency Monday and banned some cars from its roads in an effort to reduce alarming levels of dangerous air pollution.

“With toxic smog blanketing the streets, the U.S. Embassy air quality index, which measures the concentration of tiny PM 2.5 particles that can be carried deep into the lungs, exceeded 500 during the day, far above the recommended ‘safe’ limit of 60,” Reuters reports [1]. “Such a pollution reading indicates serious aggravation of heart and lung disease, and premature mortality in people with existing diseases and the elderly. It also means a serious risk of effects on the respiratory systems of the general population.”

Delhi responded with an “odd-even” system that barred cars with licence plates ending in an odd number for one day, then alternated to even-numbered plates the next. The system will remain in effect at least until November 15.

“Ride-hailing services were exempt from the rule, and both Uber and Ola had announced they would not impose surge pricing for the duration of the odd-even scheme,” Reuters writes.

One local politician, a member of Prime Minister Narendra Modi’s Bharatiya Janata Party (BJP), decided to defy the alternating ban, claiming cars only contribute 3% of the city’s pollution. Reuters says official estimates show vehicle exhausts and industry emissions accounting for more than 50% through most of the year.

“According to independent online air quality index monitor AirVisual, New Delhi was the most polluted major city in the world on Monday, at twice the level of Lahore in Pakistan, which was a distant second,” the news agency says.

In a related statement Monday, Supreme Court Justice Arun Mishra called for an immediate end to crop residue burning in the states surrounding Delhi. Reuters explains that this is the time of year when farmers in Punjab and Haryana states “start burning off the rice paddy straw and stubble in preparation for the sowing season.” The resulting smoke “combines with urban pollution from vehicles and industry to make Delhi the world’s most-polluted capital.”

In Uttar Pradesh state, meanwhile, authorities said they would use air purifiers to protect the Taj Mahal from pollution. “We are also keeping a strict vigil to ensure that people do not set fire to waste or do anything which causes pollution near the Taj,” said Bhuvan Yadav, a regional officer with the state pollution board.