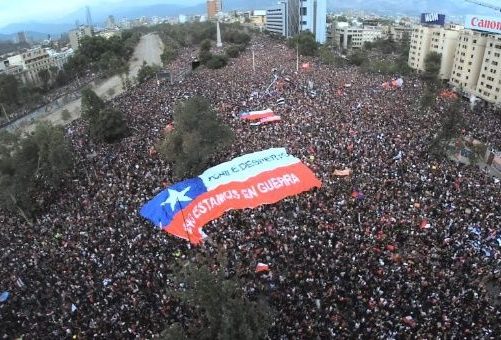 Chile’s decision to withdraw from hosting this year’s United Nations climate conference, COP 25, has international climate hawks calling for a quick effort to reorganize and relocate the meeting, to avoid losing time in the effort to speed up global greenhouse gas emissions and deliver assistance for vulnerable communities.

Embattled Chilean President Sebastián Piñera was “forced to cancel two major international summits after government concessions failed to defuse weeks of violent protests that have seen thousands of arrests, left at least 20 dead, and sent shock waves across Latin America,” The Guardian reports [1]. The protests “began in mid-October as a student-led fight against a 3.7% hike in metro fares. But those demonstrations quickly swelled into a much broader mutiny against inequality, the cost of living, and police repression.”

Citing Chile’s Human Rights Institute, The Guardian says 3,535 people have been arrested since October 17, and 1,132 people have been taken to hospital, 38 of them with gunshot wounds. “On Saturday, an estimated one million people poured onto the streets of Santiago for a peaceful protest that was reputedly the country’s largest since the dying days of Gen. Augusto Pinochet’s dictatorship in the late 1980s,” the paper adds.

“This has been a very difficult decision—which has caused us great pain—because we understand perfectly the importance [of the two international summits] for Chile and for the world,” said Piñera, who had previously demanded resignation letters [3] from his entire cabinet in a bid to quell the street protests. “When a father has problems, he must always put his family before everything else. Similarly, a president must always put his own countrymen ahead of any other consideration.”

“It is absolutely logical for no one to come. We’re in no shape to receive presidents at the moment. I support the decision,” 56-year-old protester Marcia Ruiz told The Guardian Wednesday. “The president lost control of this on day one,” she added. “It’s sad.”

Asier Hernando, Oxfam’s deputy director for Latin America and the Caribbean, drew a connection between the protests in Chile and the crises COP 25 is supposed to be addressing. “The same flawed economic policies that have sparked protests on the streets of Chile are fuelling the global climate crisis and the global inequality crisis,” he told [4] the Thomson Reuters Foundation. “Urgent action is needed by governments to build economies that put people and the environment before economic growth and corporate profits.”

Climate Action Network-International called out [5] the “heavy-handed response of the Chilean government towards civil discontent and protests in recent weeks and the deployment of force in suppressing the free movement and assembly of people,” expressing concern that moving the COP elsewhere “could open the way for continued or escalated repression of the Chilean people. We urge the government instead to use this opportunity to build a peaceful and inclusive resolution to the crisis as the foundation for a new social pact.”

“Irrespective of where and when COP 25 takes place, we will continue to pay close attention to the situation in Chile to ensure that the overarching principles of social justice and human rights are protected, especially also in the COP,” said Interim Executive Director Tasneem Essop.

Piñera’s announcement set off a dash to reorganize the negotiations. Cancelling or postponing COP 25 “doesn’t postpone climate change and its impacts,” said Greenpeace International Executive Director Jennifer Morgan. “All over the world, people are clamouring for change. The channels for dialogue have to be kept open.”

In the 24 hours after Chile’s withdrawal, Costa Rica and Poland both expressed interest in hosting, and Spain conveyed a formal offer to the UN climate secretariat for the original conference dates December 2-13. “It is encouraging to see countries working together in the spirit of multilateralism to address climate change, the biggest challenge facing this and future generations,” said [6] UN Climate Secretary Patricia Espinosa.Clean Energy Wire notes [7] that Bonn, Germany, headquarters for the UN Framework Convention on Climate Change, would be the fallback location if all else failed.