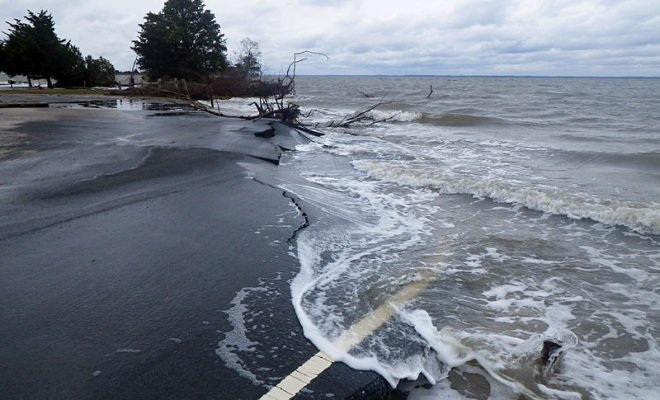 Deploying a far more accurate method than has been used to date to predict future sea level rise, researchers say three times more people than previously thought will face inundation by 2050, with some of the world’s greatest cities at risk of going under the waves.

The study by the non-profit Climate Central, published last week in the journal Nature Communications, concludes that “110 million people worldwide live below the high-tide level—including many partly protected by sea walls or other infrastructure,” reports the Washington Post. “Even under a scenario of very modest climate change, that number will rise to 150 million in 2050 and 190 million by 2100.”

Those figures are “three times—or more—higher than earlier estimates,” writes the Post.

“We’ve had a huge blind spot as to the degree of danger, and that’s what we’ve been striving to improve,” said study co-author Benjamin Strauss.

The blind spot arose, explains the Post, because climate scientists were depending on radar measurements from a 2000 space shuttle Endeavour mission to calculate their projections of sea level rise. Trouble is, the shuttle instruments “detected the height not only of the coastal land surface but anything else that was on it, such as houses and trees,” which “introduced errors in land elevation estimates averaging about 6½ feet [upwards] globally.”

“For all of the resources we have rightly invested in improving our sea level projections, we didn’t know the height of the ground beneath our feet,” Strauss said.

The Post says the Climate Central study corrects an important imbalance in global understanding of sea level rise, which to date had found wealthy countries like the United States using far more accurate, laser-based measurements to predict sea level rise along their coasts. Less fortunate countries had only the shuttle measurements to draw on.

Thanks to the new study, policy-makers focused on Asia, in particular, have a much more accurate and disturbing picture of just how many people will be displaced.

“The changes are certainly very large,” the Post observes, with the new study estimating “that 110 million people live below the current high-tide level versus an estimated 28 million for the older data set,” and that “about 250 million people would fall below the level of the worst yearly flood…up from the previous estimate of 65 million.”

The new study also predicts that “if key instabilities kick in in Antarctica, 480 million people would be exposed to an annual flood in 2100.” Grist reports [2] Antarctica melting toward that tipping point faster than previously believed.

The New York Times adds [3] that “the migration caused by rising seas could trigger or exacerbate regional conflicts,” citing Basra, Iraq as a city forecast to be “mostly underwater by 2050.” The loss of the country’s second-largest city due to rising waters would threaten “further social and political instability in the region, which could reignite armed conflict and increase the likelihood of terrorism,” said retired Marine Corps lieutenant general John Castellaw, who was a chief of staff during the American war in Iraq.

“So this is far more than an environmental problem, added Castellaw, who now serves on the advisory board of the Washington, DC-based Center for Climate and Security. “It’s a humanitarian, security, and possibly military problem, too.”