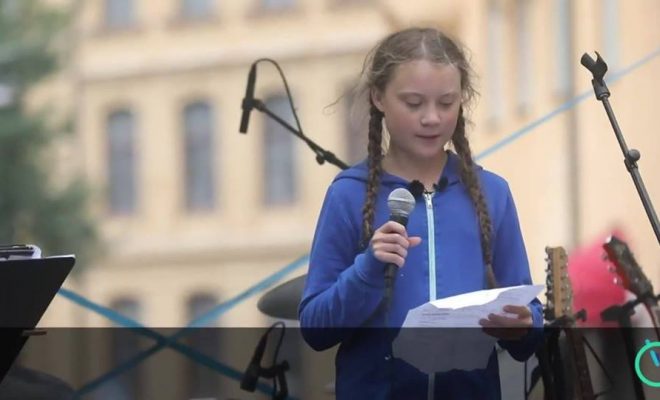 #FridaysforFuture founder Greta Thunberg is scheduled to join a climate strike at the Alberta legislature today at 11:00 AM local time, in an event organized by Climate Justice Edmonton, Indigenous Climate Action, Edmonton Youth for Climate, Beaver Hills Warriors, and other grassroot groups.

“Friday’s strike will be the latest in a series which have drawn thousands to the legislature grounds demanding government action on climate change,” the Edmonton Journal and Vancouver Sun report [1]. “Those demands include a Canadian Green New Deal—a plan to transition to 100% renewable energy by 2030 that protects workers and upholds Indigenous rights.”

Premier Jason Kenney initially welcomed Thunberg to the province, predicting she would find it a “beautiful place filled with friendly people.” He added that “we have to do better on the environmental front and we are doing better, and that’s the case I would make to Ms. Thunberg or anyone studying Alberta’s energy sector.”

But before long, “Kenney’s government began issuing smug missives: the climate oracle should make her next visit to oil-producing ‘dictatorships’ like Saudi Arabia,” National Observer writes [3]. “Then she’d learn about ‘Alberta’s leading human rights and environmental standards’ and that our fossil fuels are much better than theirs.”

The “tortured logic seems to be that, because Alberta doesn’t carry out stoning or saw the limbs from pesky journalists, climate change doesn’t matter,” notes opinion writer Chris Hatch. But “‘at least we don’t dismember our critics’ [not yet [4]—Ed.] wouldn’t be the first message you’d pick to win over the growing majority of the world increasingly panicked about tepid government response to looming catastrophe.”

He adds that “the bonesaw argument is certainly not going to sway the emerging generation of kids who are taking their lives into their own hands and have galvanized global protests unlike anything the planet has ever seen. Greta may have missed a lot of school, but she is unlikely to be moved by politicians from one of the planet’s most fortunate countries insisting we should be graded on a curve, against the worst petro-regimes in the world.”

The other question, adds [5] veteran columnist Graham Thomson for iPolitics and the Toronto Star, is who stands to learn the most from Thunberg’s visit to Alberta.

“The moment the teenage environmental activist mentioned on social media last weekend she was coming to the province as part of her North American tour, heads began exploding in Alberta,” he writes. “According to various Twitter trolls, the 16-year-old Swede who has become an international symbol of young people’s angst over climate change is ‘ignorant’, a ‘puppet’ and should be ‘arrested for election interference’.” Another group called her a “European environmental agitator” and urged her to read up on “Canadian law regarding Defamatory Libel.”

“This is one of the bizarre tactics of disgruntled Albertans—suggesting that anyone who criticizes Alberta’s energy industry is somehow guilty of slander,” Thomson writes. “Another favourite tactic of disgruntled Albertans, even when the disgruntled is the government itself: suggest Alberta be given an environmental pass because it’s not a human rights-violating dictatorship.”

Thomson says those are arguments that Alberta has been trying out and losing for a decade.

“In the case of Thunberg, the government has decided that discretion is the better part of valour,” he writes. “It will simply hunker down with the shades drawn until the fuss is over,” with Environment Minister Jason Nixon saying he just won’t have time to meet Thunberg or attend the rally at the legislature.

But neither the government nor the province’s NDP opposition can expect any relief from Thunberg. “She is the voice of young people terrified at the prospect of runaway climate change created by greenhouse gas emissions,” he adds. “And that’s a problem for Alberta politicians. None of them can expect anything but a lecture from Thunberg, who a few weeks ago told world leaders [6] at the United Nations, ‘You are failing us’.”

In the end, “Nixon said he hopes Thunberg will educate herself about Alberta,” Thomson notes. “But perhaps she is not the one who needs an education.”

Albertans believe that they should enjoy oil booms every decade and get pouty if it doesn’t happen. They get angry if anyone threatens their right to pollute.
The facts are that renewables produce energy at less than 3 cents/kWh, which price will drop more, faster, as tech matures and economies of scale occur. At these rates no other source of energy is likely to get investment money. Anyone who has read Lazard’s Levelized Cost of Energy series knows this trend well. Indeed, Oilprice.com among others, has noted that fracking operations in Texas have not produced a profit yet, even though Texas is an extremely generous jurisdiction for energy companies.
But here in Alberta, oil people like to pretend that it is the government that is hurting their pockets and bank accounts when it is the oil&gas industry that plans for ever-increasing layoffs. Albertans can call themselves CONservatives all they want, but the facts are that they can’t make any money without sucking government tit. If it weren’t for Notley the price of Alberta crude might still be $10/ barrel, and Exxon would still be crowing over the profits made in the US from this cheap crude. We should strengthen the market forces that will drive subsidized energy from the market.