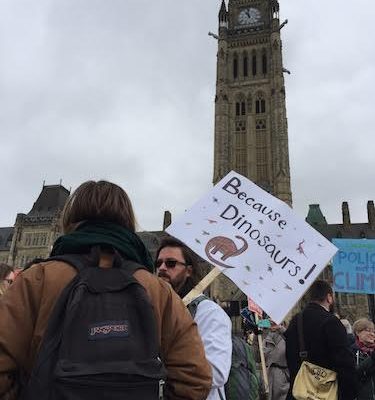 With just two weeks to go in Canada’s federal election, a week of national leader’s debates gets under way tonight, Evidence for Democracy kicked off its #VoteScience week of action, the federal carbon tax appeared to be fading as a campaign issue, and a viral video supporting the fossil industry appeared to have worked its way around Elections Canada rules on third party advertising.

Over the weekend, Evidence for Democracy Executive Director Katie Gibbs circulated a calendar for a week of #VoteScience activities that began with a letter to the editor Saturday and posting a #VoteScience selfie on Sunday. After viewing the English-language leaders’ debate tonight, E4D is encouraging supporters to tweet comments to the party leaders tomorrow, then tell two friends about the campaign on Wednesday. After the French leaders’ debate Thursday evening, the Friday assignment is to send post cards to your local candidates.

“Science doesn’t usually get a lot of attention during elections, and we think that needs to change,” E4D says [2] on its VoteScience.ca [3] website. “We need your help to send a message that Canadians care about science.”

While science advocates work to gain prominence ahead of the October 21 vote, Conservative leader Andrew Scheer may be having trouble maintaining the profile of an issue he’d hoped to ride to victory this fall. “The Conservatives were counting on turning the October 21 election into a national referendum on the carbon tax, especially in provinces that refused to establish their own and had Ottawa impose its version in April,” CBC reports [4]. “Last year, Scheer appeared on a Maclean’s magazine cover, along with Conservative provincial premiers vowing to fight the levy in the courts and at the ballot box.”

But as the campaign unfolds, “at least some voters are shrugging off the crusade against the tax, which adds 4.4¢ per litre plus sales tax to what they pay at the pump.”

Fredericton voter Jim Stevenson told the national broadcaster he’d noticed the carbon tax last summer, “but prices seem to have gone down since then,” adding that the new system hasn’t shifted his driving habits and won’t change his vote. Businesswoman Andrea Meade said the carbon tax doesn’t cross her mind when she’s filling up her company car. “Not really,” she said. “It’s the cost of doing business…If we’ve got a job to do, we go do it.”

Meade added that “there’s a lot of other issues that we’ll look at. We don’t want a Trump up here.”

“I try not to live around my car,” added voter John Geldhart. “There’s a global question of what we’re doing to invite change in our behaviours that’s going to make a difference.”

Voter Natalie Constantine, who said she works two jobs and couldn’t afford a more fuel-efficient car, had a different view. “I think it’s ridiculous. I don’t think it’s working at all,” she said. “How much more do we need to spend before we can get a break?”

Meanwhile, a Toronto Star/Buzzfeed News investigation into fossil industry advertising begins [5] with a detailed description of an online video posted by Canadians for Canada’s Future, a pro-fossil advocacy group associated with companies like Birchcliff Energy and Tourmaline Oil.

“Amid an increasingly acrimonious national debate over pipelines and climate change, the video—which has more than five million views across YouTube, Facebook and Twitter—has all the hallmarks of a political advocacy ad,” the two publications note. “But because the two-minute video was put online two weeks before the writ was dropped and because it does not name a party or a candidate, it skirts the disclosure rules that would publicly reveal who made the video, who paid for it, and how much it cost.”

The new third-party advertising rules brought in by Elections Canada were intended to put greater onus on private interests to register and disclose their election-related activities, the Star and Buzzfeed note. “But instead of increasing transparency, the new rules have instead pushed private interests to broadcast their messages earlier and earlier in the campaign cycle, where they can remain anonymous.”

(The same provisions have put a chill [6] on campaign communications by climate advocacy groups, over concerns that expressing the reality of climate change could be seen as advocacy against one federal party that has taken climate denial as its official position.)

Canadians for Canada’s Future registered its website just 10 days before the video was posted, the Star and Buzzfeed note. But Birchcliff CEO Jeff Tonken said the ad wasn’t developed with the election in mind.

“The rules are so restrictive, you can’t pay for any advertising anymore,” he said. “It stops anybody from doing anything, because they don’t want to get offside these rules.”

Political scientist Lisa Young of the University of Calgary School of Public Policy said campaign money began flowing to outside advocacy groups in 2004, after corporate and union donations were banned at the federal level.

“Back in the day, when corporations and unions could give money directly to political parties, we knew who was giving money to whom,” she said. “Now, some corporations play an active role in the political conversation via this kind of third-party spending. And when it happens inside the writ period, we have some notion of who it is that’s putting the money forward. But when it’s outside of the election period, we don’t necessarily know.”