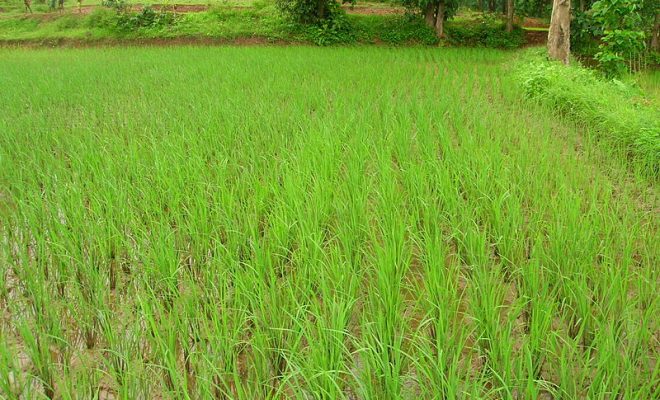 A change in rice cultivation methods known as a System of Rice Intensification (SRI) lands at #53 on Drawdown’s list of climate solutions. Wider adoption of the technique could cut carbon dioxide emissions by 3.13 gigatons and save US$678 million by 2050.

Current cultivation methods produce close to 10% of the world’s agricultural greenhouse gases, Drawdown estimates, plus up to 19% of the methane emitted worldwide. “That’s because flooded rice paddies are ideal anaerobic environments for methane-producing microbes that feed on decomposing organic matter, a process known as methanogenesis,” the summary explains.

Instead of flooding rice paddies, SRI farmers plant individual seedlings, spaced out and watered less frequently. Allowing the ground to dry between the plants means carbon can be sequestered in the soil, and reducing the amount of standing water keeps methane from microbes to a minimum.

SRI was developed in Madagascar in the 1980s when French Jesuit priest Henri de Laulanie found that aerating the soil with a rotary tiller, increasing the space between plants, and cutting water use actually boosted rice production by over 50%. The method also proved beneficial to the soil.

“Improvement in both organic and inorganic nutrients under SRI result in improved soil conditions, increasing nutrient availability and holding capacity of the soil,” Drawdown states. “Thus, less external fertilizer is required, which in turn reduces the emissions associated with the inefficient use of nitrogen fertilizers.”

And the cost to implement SRI is negligible, since the infrastructure and equipment are already in use. SRI also conserves water, requires less farm labour, and uses 80 to 90% fewer seeds than conventional methods. And since crop yields are so much higher, the method means farmers don’t have to clear extra acreage to grow more food.

Drawdown estimates that between four and five million people currently use this cultivation method on around 8.4 million hectares of agricultural land. Extending its use to 133 million hectares over the next 30 years could net upwards of 477 million additional tons of rice. Since rice is an essential food for nearly three billion people around the world, the effect of SRI on the world’s food supply would be substantial, in addition to its carbon reduction benefits.