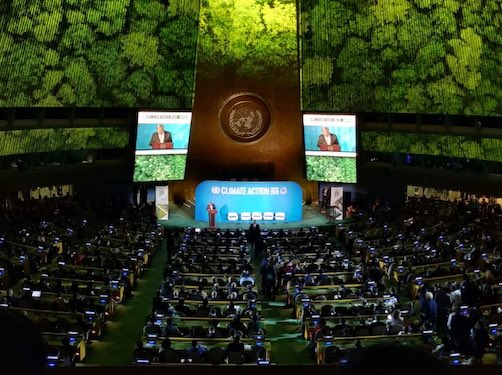 With 77 smaller countries pledging to achieve net-zero greenhouse gas emissions by 2050, but the world’s biggest emitters largely failing to step up, UN Secretary General António Guterres’ much-anticipated Climate Action Summit is being cast as a missed opportunity to gain ground in the fight to get the climate crisis under control.

“World leaders were asked to come to the UN with concrete plans to cut emissions to net zero,” Climate Home News reports [1]. “But on Monday, the presidents and prime ministers of the world’s largest emitting economies stumbled, signalling just how difficult the work of removing CO2 will be compared to setting targets.”

Despite a flurry of announcements (Climate Home [3] and the World Resources Institute [4] (WRI) live-blogged the summit, and Climate Watch was updating its 2020 NDC Tracker [5], which follows countries’ commitments to faster, deeper carbon cuts), Guterres conceded [6] in his closing remarks that “we have a long way to go. We are not yet there. Much more is needed to reach carbon neutrality by 2050 and keep temperature rise to 1.5°C by the end of the century.”

The summit produced “inspiring signs of progress,” with “the private sector and subnational actors moving faster than national governments,” said WRI President and CEO Andrew Steer. But “most of the major economies fell woefully short” of the enhanced ambition—COP-speak for more rigorous commitments to deeper greenhouse gas reductions—that Guterres has been asking for since late May.

“The contrast between the slow pace of action and the urgency of the problem was underscored by the Swedish climate activist Greta Thunberg, 16, who excoriated world leaders for their ‘business as usual’ approach,” the New York Times reports [7].

“The eyes of all future generations are upon you,” Thunberg said [8], her voice quavering with rage. “If you choose to fail us, I say we will never forgive you.”

“In her blunt and powerful speech at the Climate Action Summit this morning, Greta Thunberg laid down a clear line in the sand, separating those countries and leaders who are united behind the science from those who continue to place the profits of fossil fuel polluters above the safety of their citizens,” said [9] Alden Meyer, director of strategy and policy at the Union of Concerned Scientists. “Sadly, most leaders from the world’s largest emitting countries failed this litmus test, dodging their responsibility to step up action as is essential to address the climate emergency we now face.”

“It’s time to address corporate power and the hold it has over politics, challenge the suffocating omnipresence of the fossil fuel industry, and demand they take responsibility for the human rights impacts of the climate crisis,” said [10] Greenpeace International Executive Director Jennifer Morgan.

“This summit is a springboard for 2020, when all countries signed on to the Paris Agreement must pledge to increase the ambition in their nationally determined contribution (NDC),” Morgan added. “It was leaders who agreed to that, and leaders who commissioned the latest science for the IPCC. The difference is, now millions of people are watching to make sure they follow through. We will not stop, and we will keep going, until we see a sustainable 1.5° pathway and a just transition to a cleaner and fairer future for us all.”

“This Summit was supposed to be a turning point. But we have seen an exceptional lack of commitment from the biggest and richest polluting countries that continue to take trivial measures toward solving a life or death crisis,” said Harjeet Singh, global climate lead at ActionAid. “The UN Secretary General urged world leaders to rise to the challenge and take bold action to ensure a safe future. But the countries that have responded with the most concrete actions are the ones most vulnerable to climate impacts. At this late stage, when the window of opportunity is shrinking, we need leaders to show courage, not cowardice.”

One disappointment, the Times says, was China’s failure to commit to a faster shift off fossil fuels, as earlier reports had suggested it might. “Wang Yi, a special representative for President Xi Jinping, noted that his country was keeping the promises it made under the 2015 Paris Agreement and that ‘certain countries’—a clear reference to the United States—were not,” the Times notes.

The story also attributes China’s position to concerns about a slowing economy, as well as “Beijing’s reluctance to take stronger climate action in the absence of similar moves from richer countries. The European Union has not signaled its intention to cut emissions faster, either, and the United States is nowhere on track to meet its original commitments under the Paris accord.”

Heading into the summit, Guterres had spoken optimistically about a “turning point” in the response to the climate crisis. “I see a new momentum,” he said [11]. “I believe in these last few months [there has been] a turning point. Six months ago, I must tell you, I was quite pessimistic about everything. I would see no movement, now I see a lot of movement and we need to boost that movement.”

Guterres’ opening remarks to delegates still captured the urgency of the moment. “We are in a deep climate hole. To get out, we must first stop digging,” he said. “Is it common sense to build ever more coal plants that are choking our future? Is it common sense to reward pollution that kills millions with dirty air and makes it dangerous for people in cities around the world to sometimes even venture out of their homes?”

He added that “I will not be there” to see the future impacts of today’s climate inaction, “but my granddaughters will, and your grandchildren, too. I refuse to be an accomplice in the destruction of their one and only home.”

But despite his attempts earlier in the year to push back on any new coal development, anywhere in the world, the Times reports [12] that Guterres offered podium time to “several champions of coal”—including India, China, Pakistan, Bangladesh, and Kenya—at a formal session where countries without serious climate plans were to be excluded [13].

“Guterres’ predicament is a case study in how hard it is for the world to quit coal, the world’s dirtiest fossil fuel and still its main source of energy for producing electricity,” the paper notes. “Coal is plentiful and cheap, though not compared to solar and wind energy in many places around the world. Air pollution from coal mining and coal plants is dangerous to global public health.”

But on Friday, Guterres told reporters that “in calling for a swift transition away from coal, he was well aware that he could only tell world leaders what he wanted them to do,” the Times recounts. “That doesn’t mean it will happen,” the UN secretary general said.

“I haven’t met any leaders who know…how to get there,” said former French climate ambassador Laurence Tubiana, now CEO of the European Climate Foundation. “Most [countries] haven’t started really seriously,” and most leaders “don’t have a clue”.

“Numbers and slogans are very easy to go by, but the hard work of actually implementing is what drives the process forward,” added Elina Bardram, head of the EU’s climate action unit.

“We know how to get to 2030, but the last percentage to reach carbon neutrality, we need more techniques, we need new ideas,” said German Environment Minister Svenja Schulze. “The important thing is to say that we want to reach that goal. How it goes with the last percentage, we will see on the way.”

“We are still operating on a logic of ‘let’s reduce emissions’, even if it’s very small, it’s helpful,” said Raffaele Mauro Petriccione, director general of DG Clima at the European Commission. “But we are now moving towards a radically different logic, which is we need to eliminate most emissions, and then the choices are most difficult.”

With that shift, “we are, in half a century, trying to reverse 150 years of very fast economic development based on fossil fuels. It’s possible, and it’s desirable, but one shouldn’t be surprised that it’s complicated.”

But in the end, “most leaders completely failed to meet the bar for ambitious climate action set by Greta Thunberg and Secretary General Guterres,” said Climate Action Network-Canada Executive Director Catherine Abreu. “What is more telling is that many of those who failed clearly thought they were bringing something worthwhile to the stage. This is the challenge we are faced with: more government and private sector leaders than ever are conscious of the need to respond to the demands for climate action coming from millions of young people and citizens around the world. But they, and the institutions behind them, have no experience mustering the level of conviction this challenge requires. They are used to rolling along with a status quo economy mired in fossil fuel addiction and status quo politics that kowtow to the interests of the fossil fuel industry.”

Among the other developments before and during the summit, African nations were planning to call on the UN to declare a global climate emergency, Thomson Reuters reported [14] Sunday. In addition to the 77 mostly lower-emitting countries that showed up in New York with carbon reduction commitments, Climate Home says 70 others tipped plans to table more ambitious emission cuts next year, a development that Guterres called “a boost of momentum and ambition” in his closing remarks.

Nearly 90 companies associated with the We Mean Business coalition, with combined assets of US$2.3 trillion, promised [22] to slash their emissions, though an analysis of nearly 3,000 companies’ carbon plans by investment data provider Arabesque S-Ray concluded [23] that fewer than one-fifth of them would meet the Paris targets. More than 50 financial institutions representing $2.9 trillion in assets promised to publish the carbon impacts of their investments and loans, but the total was just a fraction of a $386-trillion global stock of financial capital, Climate Home noted [24], Danish pension funds put up [25] $50 billion to support a green transition, Danish international shipping behemoth Maersk talked [26] about zero-emission vessels by 2030, U.S. telecom giant AT&T announced [27] 1.5 gigawatts of new renewable energy purchases, and a group of 13 big fossil companies distinguished themselves by calling [28] for greater investment in carbon capture, utilization and storage in the run-up to the UN summit.