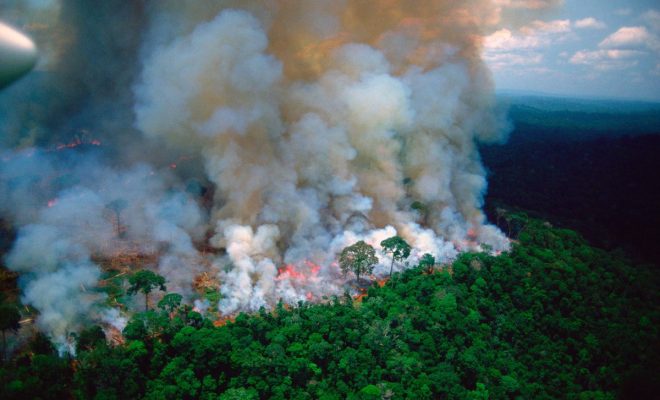 With the United Nations Climate Summit coming up in New York City next week, investor groups with tens of trillions of dollars at their command are calling for more effective government action on climate change and deforestation. But that isn’t stopping some of Wall Street’s biggest asset management companies from voting against climate change resolutions that would begin to bring colossal fossils like ExxonMobil and Duke Energy into the fight.

This week, a group of more than 500 investors with combined assets of US$35 trillion issued a call for climate action, while 230 big investors with $16.2 trillion under management urged [1] companies to keep watch on their supply chains in a bid to stop forest destruction.

“Climate change is such a critical issue for investors’ portfolios and there are so many risks associated with it, and also huge opportunities,” said [3] Stephanie Pfeifer, CEO of the London-based Institutional Investors Group on Climate Change, one of the groups that signed the joint letter calling for climate action. “The right kinds of policies will help direct capital in an appropriate way, so we are able to tackle the issue of climate change from an environmental perspective, but also safeguard portfolios.”

“Deforestation and loss of biodiversity are not only environmental problems. There are significant negative economic effects associated with these issues and they represent a risk that we as investors cannot ignore,” said Jan Erik Saugestad, CEO of Storebrand Asset Management, Norway’s largest private asset management firm, who signed the anti-deforestation letter organized by Boston-based Ceres.

Bloomberg notes that global warming “has massive implications for investors,” and the $2.6 trillion [4] likely to be invested in clean energy this decade won’t be enough to reduce that risk. “The world must invest $2.4 trillion in clean energy every year through 2035 and cut the use of coal-fired power to almost nothing by 2050 to avoid catastrophic damage from climate change,” the U.S.-based news agency writes, citing last year’s 1.5°C pathways report [5] from the Intergovernmental Panel on Climate Change.

“That kind of shift in capital flows toward new energy technologies means investors want more clarity from governments about regulation and other policies that will guide the transition.”

In a separate initiative, investors with $15 trillion under management “turned up the heat on the oil and gas sector” ahead of next week’s climate summit, Reuters reports [6]. With investors “potentially on the hook for hefty losses if the companies do not overhaul their business models in time,” the news agency states, “the Transition Pathway Initiative (TPI) said 31 out of 109 energy firms were aligned with commitments governments have so far made under the 2015 Paris Agreement to curb greenhouse gas emissions.” But only two of the 50 oil and gas companies in the analysis were matching their plans with national emissions targets under the Paris deal.

“We, as a major institutional investor, are concerned that transition risk—the large and growing gap between government targets and company ambitions—is a major source of investment risk,” said Helena Viñes Fiestas, global head of stewardship and policy at BNP Paribas Asset Management.

“There is no doubt that oil and gas companies are in a difficult position in navigating the transition to a low-carbon economy,” added Euan Stirling, global head of stewardship and ESG investing at Aberdeen Standard Investments. “That makes it all the more important that we have at least some sector constituents who are starting to respond to the climate crisis by repositioning their businesses from the top down, in the same way that many power generators have.”

The Ceres resolution, meanwhile, “called on companies to implement a ‘no deforestation policy’ with ‘quantifiable, time-bound commitments’, assess and disclose the risks their supply chains pose to forests, establish a monitoring system for supply chain partners, and report annually on ‘deforestation risk exposure and management’,” Reuters writes. “The resolution did not explicitly say signatories were threatening to withdraw investments from any companies. Still, it added to the pressure that international corporations and investors have put on partners operating in the Amazon, the world’s largest tropical rainforest that lies in Brazil [7], Bolivia, and seven other countries.”

But while the three investor initiatives appeared to be gaining momentum, they hadn’t yet picked up support from BlackRock Inc. or Vanguard Group, two of Wall Street’s biggest players, with more than $11 trillion under management between them. A report this week by Washington DC-based Majority Action and the Climate Majority Project found that the two firms “have voted overwhelmingly against the key climate resolutions at energy companies, including a resolution at ExxonMobil’s annual shareholder meeting, and at Duke Energy,” The Guardian reports [8].

“Had BlackRock and Vanguard not torpedoed these investor efforts, at least 16 climate-critical shareholder resolutions at S&P 500 companies would have received majority support in 2019, representing a significant corporate shift on climate,” the UK-based paper adds, citing the report.

“The climate crisis is well upon us, and leading investors are stepping up to press fossil fuel-dependent companies to align their strategies to the goals of the Paris Agreement, but some of the largest U.S. investment companies are severely lagging,” said Majority Action Director Eli Kasargod-Staub. “BlackRock and Vanguard have been using their shareholder voting power to undermine, rather than support, investor action on climate.”