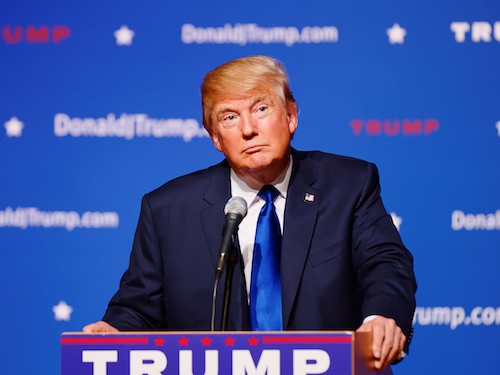 Donald Trump may or may not have been kidding around last week when he said he was rolling back a regulation that would save [1] U.S. consumers 25 coal plants’ worth of greenhouse gas emissions and US$14 billion per year because LED light bulbs make him look orange.

“The lightbulb,” he told House Republicans during a policy retreat in Baltimore. “People said, what’s with the lightbulb? I said, here’s the story. And I looked at it, the bulb that we’re being forced to use, number one to me, most importantly, the light’s no good. I always look orange. And so do you. The light is the worst.”

The remark “drew laughs from the audience, though it was not immediately clear whether the president meant it in jest or in earnest,” the Washington Post reports [3]. “The White House did not immediately respond to requests for comment.”

The Post goes through the various nicknames Trump has earned for what the paper calls his “characteristic golden hue,” citing professional photographers and make-up artists who say energy-efficient light bulbs are probably not to blame. Washington, DC-based freelance photographer Jocelyn Augustino explained that different types of bulbs have different light temperatures, but that doesn’t usually have much impact on anyone’s complexion.

“When you go into a family’s house, just because there are tungsten lights, I don’t think you look around the room and think everyone looks orange,” she told the Post.

Rockville, MD portrait photographer Tamzin Smith said Trump’s distinctive orangeness shines through, even when he’s photographed against a white background, adding that if the lighting were to blame, the colour change would apply equally to a white shirt or even his teeth. “You can see that even when his teeth are white, his skin is orangey-red,” Smith said. “It’s definitely not the lighting.”

Jason Kelly, official make-up artist to the Republican National Convention in 2016, said the discolouration is more likely a result of artificial tanning and overuse of bronzer. “When I see him, I see a line of oxidized bronzer around his hairline,” he said. “The application is like a kindergartner did it.”