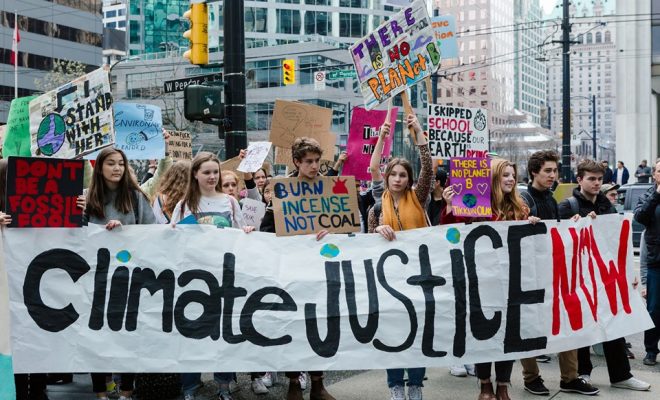 Canada’s federal election campaign officially got under way Wednesday morning, with anti-pipeline protesters gathered outside Prime Minister Justin Trudeau’s campaign launch and teen climate hawks from Sustainabiliteens chanting and singing in a bid to drown out his speech at the Italian Cultural Centre in East Vancouver.

“My friends, it is so good to be home,” said Trudeau, who taught school in Vancouver at an earlier point in his career. He started his campaign in British Columbia, just as he did in 2015, amid indications “that B.C. will play a pivotal role in deciding the coming election, with some describing the province as a key battleground for the Liberals,” CBC reports [1].

“The election looks to be a close, one and British Columbia has the largest number of seats west of Ontario, so those numbers always matter,” said University of B.C. political scientist Gerald Baier. “Add to that the fact that the two Green Party MPs…are from British Columbia, and a presumed rise of the Green Party, [and] there are all kinds of factors that suggest B.C. will be important in the 2019 federal election.”

But while a partisan crowd greeted Trudeau with loud chants and cheers, not everyone was shouting in his favour. The group from Sustainabiliteens was drowned out by the larger audience at first, CBC reports, but their songs demanding climate justice managed to disrupt Trudeau’s rally.

“The Trans Mountain pipeline and questions about Alberta’s access to international markets are going to impact B.C.,” Baier said. “In other parts of the country, [the Liberals] can be casting themselves saviour of the environment for trying to bring in a carbon tax. That’s a moot point in B.C.”

A flurry of public opinion polls marked the opening of the official campaign. Léger had [3] the Conservative and Liberal parties in a virtual tie, with 35 and 34% of the vote respectively, and the Greens and NDP with 11% each, while CBC said [4] regional breakdowns would give the Liberals an edge in a tight race. A new Mainstreet poll showed [5] slight growth in Liberal support, opinion analysts said [6] Canadians in almost every riding see climate action as a priority, Angus Reid concluded [7] Canadians want aggressive climate action and increased fossil production, and Calgary Herald columnist Chris Varcoe said [8] that dual demand will be a challenge for the fossil industry.

The Globe and Mail recalled [9] that the Liberal Party bombed in 2008 when it tried to campaign with then-leader Stéphane Dion’s green shift at the centre of its platform, but editorialized that the same principles might get a more receptive hearing in 2019. “Polls show [10] that Canadian voters care about climate change more than ever,” the Globe wrote. “The question to be answered this fall is what they want the next government to do about it.”The Toronto Star listed [11] transit, disaster management, bicycle infrastructure, and housing as priorities that cities will bring into the campaign. And The Tyee noted [12] that Suncor, the Alberta oilpatch’s biggest fossil, was strangely silent in the run-up to the campaign—quite possibly because it supports the pan-Canadian climate plan that federal Conservatives, Alberta’s United Conservative Party, and much of the fossil industry [13] are all campaigning against.