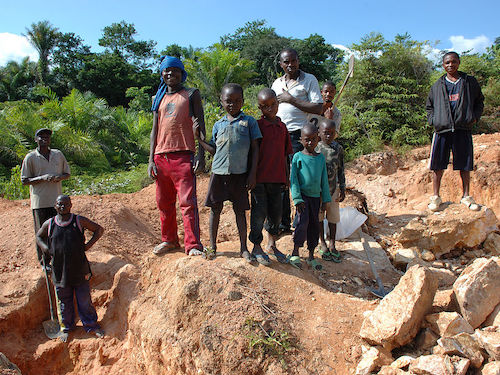 The raw materials behind electric vehicles, solar panels, and wind turbines are being linked to local land rights infringements, corruption, violence and death, with 87% of the 23 largest companies supplying the industry’s six most essential minerals facing allegations of abuse over the last 10 years.

But the organization reporting the data says renewable energy businesses may have the market clout to force changes on the part of mid-sized mining companies that have paid limited attention to human rights issues up to now.

“As the global economy switches to low-carbon technologies to combat global heating, demand for minerals could rise by as much as 900% by 2050,” The Guardian reports [2]. “In order to prevent further human rights abuses, renewable energy companies urgently need to clean up their supply chains,” the paper adds, citing senior researcher Eniko Horvath of the London, UK-based Business and Human Rights Resource Centre (BHRRC).

“As the renewable energy sector finds its feet, it is crucial that it introduces rigorous human rights protections throughout its supply chains,” Horvath said. “This is essential in order to prevent abuse, retain the social licence to operate, and avoid costly delays due to local opposition.”

In a report published this week, BHRRC looked at the supply chains for six minerals—cobalt, copper, lithium, manganese, nickel, and zinc—all of which are essential in the transition off fossil fuels. It concluded that published human rights policies had scant impact in preventing allegations of abuse, indicating that those policies that exist are either insufficient, or insufficiently enforced. BHRRC Deputy Director Marti Flacks said many mining operations escape scrutiny in countries with weak regulation, poor enforcement, and a more casual approach to the rule of law.

That means renewable energy companies “need to do their due diligence no matter where they’re working. This is not just about one country or one mineral,” Flacks said. “The companies that develop these six minerals are by and large more medium-sized mining companies, which don’t have as extensive due diligence or human rights policies in place, nor have they faced the same kind of exposure the larger companies have had, which means they haven’t been subject to the same kind of scrutiny.”

But a rapidly-growing renewable energy sector “has a chance to change the standards and practices of the industry,” she added. “This is a unique chance to send the sector a message to say: ‘You have to do your due diligence, you have to have a human rights policy, and you have to be engaging in multistakeholder initiatives, doing site visits, and most importantly talking to communities and NGOs to get accurate reporting of what’s going on.’”

Cobalt [3], an essential ingredient in electric vehicle batteries, led the list of materials linked to human rights abuses, with 31 allegations documented in the Democratic Republic of the Congo [4] between 2017 and 2019. “Tens of thousands of artisanal miners—a large number of whom are believed to be children—face dangerous working conditions, relocations, and toxic pollution,” The Guardian writes. Copper, a key component for wind turbines and solar panels, placed second on the BHRRC list, with 22 allegations in Zambia between 2010 and 2019.The BHRRC report landed just days before analysts at Evercore ISI urged automakers to invest £100 billion in the mining sector to guarantee the mineral supplies they need to continue building batteries, The Telegraph reports [5]. “Not being able to source enough rare metals and minerals may force carmakers to battle for supplies, keeping costs high and preventing electric vehicles from going mass market,” the paper states.