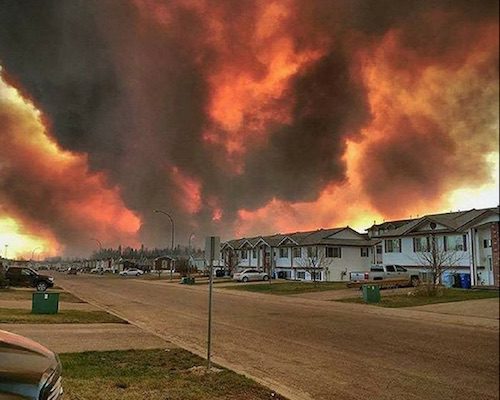 More than one-third of high school students in Fort McMurray are showing signs of post-traumatic stress disorder (PTSD), three years after the wildfire known as The Beast tore through their home town and forced many of them to escape by road through a wall of surrounding flames.

“Schools in the northern Alberta city have changed significantly since the 2016 wildfire, with mental health resiliency training and breathing exercises now a fixture in many classrooms and yoga working its way into physical education as a means of calming anxious students,” the Globe and Mail reports [1]. But even so, 37% showed PTSD symptoms in a University of Alberta survey conducted 18 months after the evacuation.

Even students who moved to Fort Mac after the fires showed elevated rates of trauma, after hearing their classmates’ stories and seeing burned-out homes in the community.

“The rates of PTSD are extremely high. The trauma on these kids and the trauma on the local community is highly significant,” said psychiatry professor and senior author Peter Silverstone. “At this age, the amygdala and hippocampus in kids’ brains are still developing, and these sorts of stressors can increase long-term risks for anxiety, depression, alcohol abuse, and other things.”

Silverstone added that other factors may be taking a toll, pointing to crashing oil prices and a collapsing local economy made worse by the fires. “There are other issues in the community, with depression, anxiety, possible drug abuse, and marital breakup,” he told the Globe. “These things feed on each other. Unhappy families have unhappy kids, for obvious reasons.”

The impacts on local students mounted up despite the school system’s best efforts. Districts hired more counsellors and placed a full-time mental health worker in every high school, and they’re preparing to roll out a strengthened resiliency program, designed by Silverstone, in January.

“We were disappointed the numbers were that high because we put significant resources in place and we were hoping, always taking the positive, that the numbers would be lower,” said Monica Mankowski, deputy superintendent in the Catholic school district. “We knew they would be high. We didn’t think they’d be that high.”

“We’ve known all along that Year 3 was going to be one of the toughest years, and by Year 5 we’ll be crawling out,” added Shannon Noble, an assistant superintendent of Fort McMurray’s public schools. We’re not pulling back supports any time soon. We know there’s hard work ahead.”

Noble added that the breathing exercises and yoga are a big shift from the schools’ mental health programs before the fire. “We’re constantly churning kids through groups and one-on-ones,” she said. “Before the wildfire, a teacher may have called a parent and told them to go to the hospital or get a therapist. Now, we have those supports in the school, and we deal with it in the school house.”