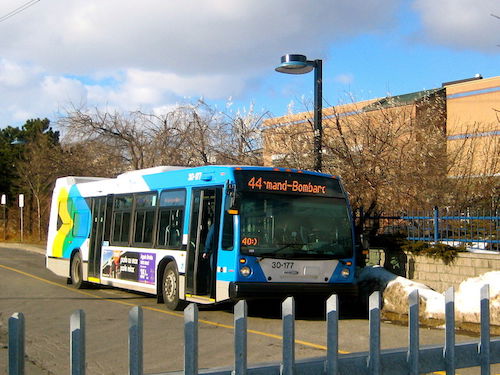 If Canada wants transit agencies to buy more electric buses, it should introduce the kind of simple, predictable, easily accessible funding that is jump-starting adoption of electric vehicles, Fernando Melo of Clean Energy Canada and Robert Parsons of the University of Manitoba argue in a post for Policy Options.

“An easy-to-access federal program gives a C$5,000 rebate to drivers who buy an electric car. But this kind of help is not offered to transit agencies that want to acquire electric buses,” Melo and Parsons write [1].

“It’s true that transit is in itself a climate solution, as buses and trains help get people out of individual cars,” making the mode about 20 times cleaner than private vehicles, according to one study in Montreal. “But the vast majority of transit vehicles still pollute. Electric buses, on the other hand, cut pollution by eliminating tailpipe exhaust entirely, and they’re healthier for the many riders who board them every day.”

Clean Energy Canada’s paper last spring, Will Canada Miss the Bus [3]?, raised the flag about the country falling behind on e-bus adoption. Now Parsons, a sustainability economics professor at U of M, is stressing [4] the importance of predictable, easily accessible funding, supported by a streamlined application process.

The two authors see some signs of progress, with Vancouver and British Columbia signing a U.S.-based Drive to Zero pledge and the federal government investing in new electric buses in Brampton, Ontario. “But such funding often comes through a variety of programs that support multiple projects,” they write. “It can entail lengthy applications and approvals before even a single bus can be purchased. The process may be appropriate for large infrastructure projects, but it can be a major deterrent for a small, resource-strapped municipality that wants to cut its carbon footprint.”

By contrast, a federal zero-emission bus rebate modelled on the current program for EVs “would help level the playing field for small municipalities—for the cities and towns whose transit managers might not have time to manage a lengthy funding application process, on top of making sure their current fleet runs smoothly,” Melo and Parsons note. “It would also allow the Public Transit Infrastructure Fund, which is currently the main source of bus funding, to focus its spending on other essential elements such as charging installations, and the integration work that is needed for widespread zero-emission bus adoption.”

Parsons’ paper envisions a six-year, $100-million effort, with rebates starting out at $250,000 per zero-emission bus and falling to $50,000 by the end of the program. “It would also be in pace with the predicted drops in the cost of electric buses, which are expected to hit sticker price parity with diesel buses around 2030,” he and Melo note.

That level of investment would be enough to cushion an up-front disadvantage that opens the door to future gain for cash-strapped transit agencies. “We know that zero-emission buses have significantly lower operating costs, thanks to savings in fuel and maintenance,” they write. “But for now, their higher purchase price means diesel buses are, in many cases, marginally cheaper on a total-cost-of-ownership basis. That’s why, for a rebate program to tip the total cost of ownership in favour of zero-emission buses, it needs to be a long-term commitment.”