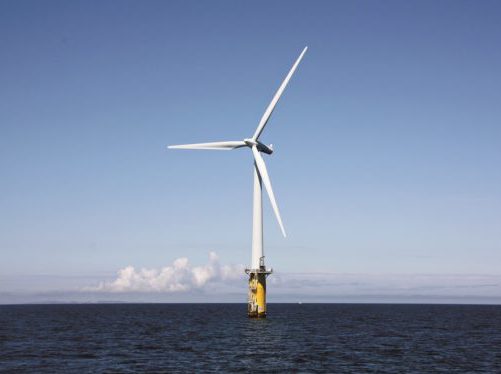 The Trump administration is showing a distinct double standard in a series of decisions to deregulate fossil fuel development while slowing down the landmark Vineyard Wind offshore wind farm in Massachusetts.

Construction on Vineyard Wind was to begin this year, and the turbines would generate enough electricity for more than 400,000 U.S. homes. The country’s biggest offshore wind project to date, it’s been seen as a signal that the U.S. offshore industry has arrived. “But this month, the Bureau of Ocean Energy Management (BOEM) said it was expanding its review of the environmental impacts of the project to include a ‘more robust’ analysis of the potential cumulative impact if other offshore wind farms are built,” InsideClimate News reports [1].

“The expanded review is potentially broad, with ramifications for Vineyard Wind and several other projects,” InsideClimate adds. “And yet, the office has provided almost no details on the scope. The project developers said they had not received any documents showing parameters of the review.”

Until now, project developers Avangrid Renewables and Copenhagen Infrastructure Partners were pushing to launch construction by the end of 2019, in time for qualify for a federal tax credit that is due to expire at the end of the year. “While the developers say they are still committed to the project, the potential loss of the tax credit could lead them to rethink their plans,” InsideClimate writes.

It isn’t as though environmentalists in the U.S. (and elsewhere) haven’t been asking for cumulative environmental and climate impact assessments for related energy projects. “The problem, some critics say, is that there appears to be a double standard [3] in this administration,” after officials cancelled a comprehensive review of the federal coal leasing program, eliminated cumulative GHG impact reviews from the government’s compliance with environmental legislation, and showed reluctance to look at cumulative impacts of offshore fossil projects.

“The Department of Interior has practically tripped over itself in speeding up the approval of fossil fuel projects and now they are slow-walking this renewable project,” said Michael Gerrard, director of the Sabin Center for Climate Change Law at Columbia University. “That could fundamentally damage the economics of the project.”

“I can’t think of an instance in which BOEM did an additional cumulative impact analysis on its own accord without being forced to do so by litigation,” said Center for Biological Diversity layer Kristen Monsell, referring to offshore oil and gas projects.

Avangrid Renewables says it’s still committed to the US$2.8-billion project, but is updating its schedule because “the original timeline is no longer feasible.”

“Offshore wind is a new area of development—what the whole picture looks like is changing pretty rapidly as interest increases,” said Hana Vizcarra, a staff attorney at the Harvard Law School Environmental and Energy Law Program. “So it wouldn’t surprise me that this is just sort of a normal hiccup for an agency trying to get through the full process for its first major project.” But Gerrard said it’s odd for an agency to ask for extensive new analysis after a draft environmental assessment is already in hand.

“Had BOEM called for extensive cumulative impact analysis during the scoping process, that would be fairly standard,” he told InsideClimate. “But demanding a major expansion after publication of the draft EIS is very unusual and smacks of the sort of bureaucratic impediments to development that Trump campaigned against.” ICN says BOEM is justifying the additional review on the basis that “a greater buildout of offshore wind capacity is more reasonably foreseeable than was analyzed in the initial draft EIS.” The U.S. Environmental Protection Agency is also concerned about cumulative impacts on commercial fishing and the marine environment, and how Vineyard Wind could help states meet clean energy goals.