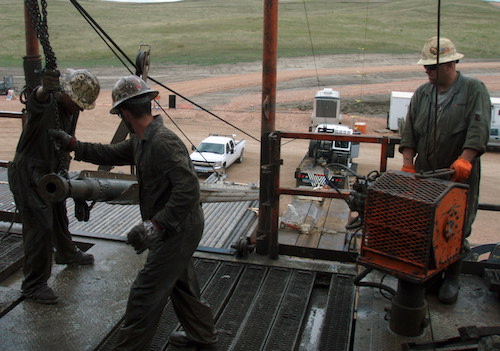 National Observer and Global News are out with a blockbuster investigative report that alleges potentially deadly health and safety problems in the western Canadian oilpatch, driven by a pervasive “culture of silence” in which accident reports are falsified, would-be whistleblowers are at risk of being fired and ostracized, and not a single fossil in Alberta or Saskatchewan has ever been charged or penalized for filing deliberately misleading paperwork.

“In the course of this investigation, four of the former oil and gas workers from both provinces who spoke about their experiences, alleged that the issue of covering up near-misses, accidents, and rule-breaking in the oilpatch was widespread, despite the severity of consequences for being caught,” Observer writes.

But “such is the culture of silence in the oil and gas industry, and the fear of losing one’s bread and butter,” that only one of those workers was willing to be quoted by name—and that former employee was the only one who retained any evidence to support his story. That was important, because “once an incident has taken place, it’s hard to go back in hindsight and retrieve incriminating records without raising any red flags within the company.”

The practice of falsifying paperwork in a way that obscures accidents and safety violations “is not only a ‘problem’ with certain employers,” said one whistleblower from Saskatchewan. “It is a systemic cancer in the oilfield work culture.” He added that the pressure to alter records often comes “from above”, Observer reports, “and is almost always verbal, which makes it tough to prove on paper.”

[This story is The Mix’s summary of a comprehensive feature investigation by two leading news organizations. You can also click here to read the whole story.]

The feature-length account opens on the story of Matthew Linnitt, an oilpatch contractor working for Canadian Natural Resources Ltd. (CNRL) who “says he read between the lines: lie on official documents about an incident that could have killed him, or someone would be fired.” He alleges he received the “tacit threat” from a CNRL supervisor after a May 2, 2016 incident in which he was “lucky to have escaped with his life”, after highly toxic hydrogen sulphide (H2S, or sour gas) erupted from a well site in Karr Creek, northwestern Alberta, after a valve was improperly shut down.

“He searched for the site’s emergency breathing equipment, only to find that the workers who had improperly sealed the valve had also taken the air packs off site,” Observer recounts. “Without cell service, Linnitt ran far away from the fumes and stayed away until his air monitor told him the sour gas levels no longer posed a threat.”

Afterwards, he “faced a difficult choice: he could report what happened and risk being fired for revealing that CNRL had violated safety protocols, or he could lie to save his job.”

Neither CNRL nor the Canadian Association of Petroleum Producers chose to comment for Observer’s story.

In contrast to most of the cases Observer and Global discovered, Linnitt kept records and ultimately shared his concerns with CNRL’s human resources department, more than two months after his brush with death. “In an email chain shared with this investigation, he wrote that he had been sent multiple times, against protocol, to work on sour gas sites alone, without having completed the requisite safety training,” Observer writes. “Linnitt confessed to falsifying the Karr Creek incident report filed on May 4, 2016 after his initial report, which outlined the missing air packs, triggered a ‘call from my foreman informing me that if I did not rewrite the report I would be fired’.”

“I was instructed to rewrite the report and include that I was packed up,” Linnitt wrote to the human resources staffer. “If I did not, (a senior executive) would want someone fired. So I rewrote the report. I lied and said that I packed up when in fact I did not. I couldn’t have. There was no emergency air onsite.”

But more than two months later, “I regret this lie. I have had a lot of trouble since then. I do not feel safe at work, I do not sleep well. I have lost confidence in those who are tasked with managing my work.”

After Linnitt, who now lives in British Columbia and works in the trucking industry, initially falsified the incident report, he said he was “applauded by his CNRL supervisor, a foreman, for ‘excellent safety practice’ for using the air packs.” Subsequently, in a call that Linnitt recorded and shared with the investigative news team, the supervisor denied directly threatening him but acknowledged that he knew there was no breathing apparatus on the site, and that the incident report was false. “You didn’t have anything there to do your job right,” the foreman said.

The CNRL HR officer ultimately rejected that evidence—essentially, bizarrely concluding he was falsely claiming to have made a false claim.

Linnitt said the inaccurate paperwork is part of a “systemic problem” of oilpatch rule-breaking, in which “good people are incentivized to lie” to keep their jobs, and the transgression is rarely caught. In the course of the news investigation, National Observer and Global News spoke with five current and former fossil workers in Alberta and Saskatchewan, all of whom “admitted to having lied or omitted facts on official documents about health and safety incidents, or to witnessing someone else do it in order to avoid being fired.”

“I think part of the reason is that companies feel they need to be as competitive financially as possible,” the Saskatchewan whistleblower said. “So if it is for an actual safety concern or a health concern that would adversely affect that bottom line, you have then become a problem on that rig. And so it would not be unreasonable or unexpected if you then would find yourself out of a job.”

As for the workers who tell the lies, “people very, very much wish they didn’t have to do this,” he added. “The No. 1 reason they do falsify the reports is, I would argue, job security. They feel their jobs, their livelihood, is at risk if they don’t do the expectation of contractor management, and oil management.”

In declining to comment for the Observer/Global News investigation, the Canadian Association of Petroleum Producers said it saw no evidence of an industry-wide trend. “In our view, these examples do not appear to be specific to a majority or even a minority contingent of our membership or our industry,” wrote spokesperson Killeen Kelly.

But Alberta Federation of Labour President Gil McGowan told Observer there are “really good performers” and “really bad performers” in an industry that has, “frankly, fallen victim to what I would describe as a lax culture of workplace safety.”

After reviewing Linnitt’s documentation, “I have to admit, while I’m saddened by the stories that are contained in those documents, I’m not at all surprised,” McGowan added. “There is a long-standing history of suppression of workplace health and safety claims. There is a tradition in Alberta of putting health and safety concerns on the back burner.”

Under Alberta’s oil and gas regulatory regime, the incident should have been reported, Observer says. The Alberta Energy Regulator “notes that proper reporting is a ‘pillar’ of the law, prompting it to consider prosecutions if false reporting is discovered.” The Karr Creek incident “does not, however, appear in the AER’s database, indicating that CNRL never notified the regulator of the toxic geyser of gas and fluids that sent Linnitt running into the bush that day.” Linnitt said he reached out to an AER official who promised to return his call after finding out how she should handle the complaint, but never heard back. Asked whether the AER would now open an investigation into the incident, public affairs advisor Shelley Svetlana wrote that “the AER takes these kinds of non-compliances seriously. We strongly recommend that your source report his concerns through our 24-hour emergency call centre at 1-800-222-6514 so we can follow up on the specific situation cited above.”