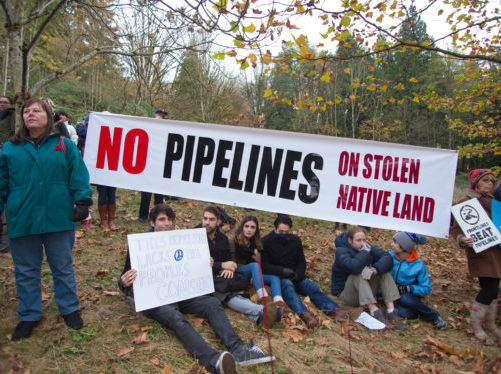 Campaign groups and constitutional lawyers are raising concerns about free speech and a fossil lobbyist is bragging about his success, after nine U.S. states adopted laws at the behest of the fossil and chemical industries that make it a felony to engage in peaceful anti-pipeline protests.

The template for the bills came from the Koch-funded American Legislative Exchange Council (ALEC), which “encourages state lawmakers to advance ready-made bills on topics ranging from gun rights to tort reform,” Bloomberg adds. Other participating organizations include the American Fuel and Petrochemical Manufacturers (AFPM) and the American Chemistry Council.

Coverage for The Intercept focuses [2] on the 102-year-old AFPM’s role in leveraging political power and so-called “dark money and influence” to criminalize community pushback against fossil infrastructure—just as it spent US$30 million last year to defeat proposed carbon tax legislation in Washington State. “In an audio recording obtained by The Intercept, the group concedes that it has been playing a role behind the scenes in crafting laws recently passed in states across the country to criminalize oil and gas pipeline protest,” writes investigative reporter Lee Fang.

“So you see that, and you’re reading the materials as well, that this model legislation would itemize criminal trespass and also a liability for folks that cause damage during protest,” AFPM’s senior vice president for federal and regulatory affairs, Derrick Morgan, told a conference in Washington, DC in June. “Another key aspect of it, which you also include, is inspiring organizations—so organizations who have ill intent, want to encourage folks to damage property and endanger lives—they are also held liable.”

But The Intercept points to the disconnect between the language justifying the legislation and its actual intent. “Any effort to sabotage pipeline infrastructure is already a federal crime,” Fang writes. But “the AFPM-backed bills expand the purview of law enforcement, classifying peaceful protests that seek to block the construction of pipelines as a violent threat.”

And the penalties are egregiously high. “For instance, the Oklahoma variation of the law, which copies much of the template legislation, creates fines of at least $10,000, and imprisons, for up to a year, demonstrators who have shown the ‘intent’ to have trespassed to damage or in any way disrupt an infrastructure facility. Those convicted of damaging or disrupting infrastructure face a minimum of 10 years in prison, as well as as much as $100,000 in fines.”

Oklahoma is prepared to fine advocacy groups linked to protests between $100,000 and $1 million, while Iowa defines “sabotage” as any action that interrupts “a variety of services” and gives it a price tag of $85,000 to $100,000. The Iowa version of the law “has the potential to chill environmental protest, punish public participation, and mischaracterize advocacy protected by the First Amendment,” said Daniel Zeno, Iowa advocacy director with the American Civil Liberties Union.

In some cases, the state laws “can include activists who have permission from landowners to mount protests in the fields and trees near critical energy infrastructure. Some states have extended penalties to organizations found to have ‘conspired’ in the activity,” Bloomberg adds.

The companies say they respect the right to peaceful protest and assembly, but needed to take legislative action to protect their infrastructure—and, they claim, the protesters themselves. “These laws are necessary—not only for the safety of the communities in which we operate, but also for the safety of those exercising their rights to demonstrate,” said Koch Companies Public Sector spokesperson David Dziok. “Clearly, there have been many who agree that this type of legislation is necessary to counter threats of vandalism that can disrupt emergency services and people’s lives,” Marathon Petroleum added in an emailed statement.

“It’s the fossil fuel industry that wants to put its opponents in jail, not the average voter,” responded Greenpeace’s Gibson. “We have never seen widespread rallies to make building petrochemical pipelines a national priority. This phenomenon illustrates the broad problem we have with undue corporate influence in U.S. politics, where the demand of a wealthy minority dictates the outcome for the majority.”

Pam Spees, senior staff attorney with the Center for Constitutional Rights, which has filed a suit against the Louisiana legislation, said a property owner or hiker could be at risk of a five-year prison sentence for “just being in the wrong place at the wrong time.” She added that, “if the concern really was about protecting the physical infrastructure, there are already laws on the books that do that.” Which means the new measures “are clearly targeting protests and expression that are clearly focused on pipelines and opposition to pipelines.”

This week, the state government in Queensland, Australia introduced a law that gives police new power to search climate protesters and “make it illegal to possess a device used for locking on,” The Guardian reports [3]. The measure is largely seen as a response to stepped-up protests by Extinction Rebellion.

“In state parliament on Tuesday the Queensland premier, Annastacia Palaszczuk, announced stronger penalties and expanded police powers that would apply to climate demonstrations and vegan protests at agricultural properties,” The Guardian states. “Palaszczuk claimed in parliament that protesters had used ‘sinister tactics’—cylinders containing glass fragments and gas containers ‘so that anyone trying to cut a protester free will be injured or worse’.”

“Police will have the power to search those they reasonably suspect…of having those devices. They will be illegal,” Palaszczuk declared. “Every single minute our [emergency services] spend dealing with these types of protesters is a minute they are spending not helping others. It will not be allowed to continue.”“Everyone has the right to conduct a peaceful protest but the activities of some are not,” she tweeted [4]. “Blocking roads is dangerous, reckless, irresponsible, selfish, and stupid. The sinister tactics some protesters are using are dangerous and designed to harm.”