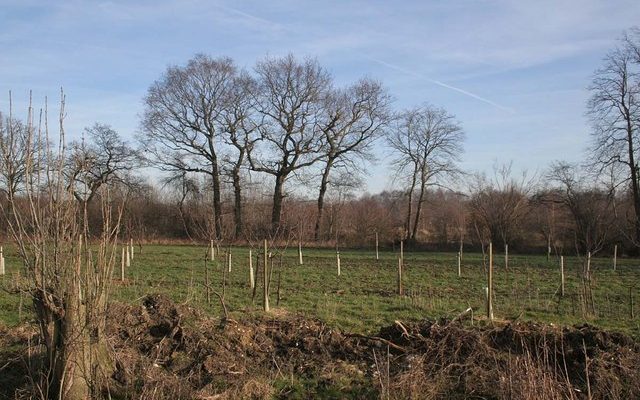 Afforestation—cultivating timber plantations on previously depleted land—comes in at #15 on Drawdown’s list of climate solutions. By sequestering carbon in timber, soil, and biomass, newly-planted forests can reduce atmospheric carbon dioxide by 18.06 gigatons, Drawdown calculates. And from an initial implementation cost of US$29.44 billion, a net operational savings of $392.33 billion is projected to grow.

Afforestation is already widely practiced across the globe, Drawdown notes. As of 2014, 709 million acres (287 million hectares) of timber were planted on lands once devoted to crops, pasture grassland, mining, and other uses. Until recently, much of that afforestation consisted of commercial monocrops, with a single species planted for eventual harvesting. But afforestation as a carbon offset is gaining popularity, and planting intentional forests on an additional 204 million acres (82.5 million hectares) will create what Drawdown calls “a carbon sink, drawing in and holding on to carbon and distributing it into the soil.”

Commercial timber plantations are controversial—from a climate perspective, harvesting the trees releases a substantial amount of carbon, and from a local perspective, monoculture plantations don’t always benefit either the local biome or the communities that surround and inhabit them. But Drawdown notes at least one additional benefit: Harvesting timber from plantations reduces deforestation and its resulting emissions elsewhere.

And it is possible for afforestation to be carried out in ways that are healthy and restorative to local ecologies. Drawdown points to the work of Japanese botanist Akira Miyawaki, who cultivates zones dense with native species that grow quickly and foster biodiversity. His plots respond to “human needs for firewood, food, and medicine,” the summary states, offering flood and drought protection where little existed before.

Although food production and forest restoration remain higher land use priorities for many, increasing afforestation sequesters carbon, revives depleted landscapes, and protects intact forests by providing alternative sources for timber. Commercial timber plantations do raise some important environmental concerns, but Drawdown says they may be outweighed by the potential for climate restoration.