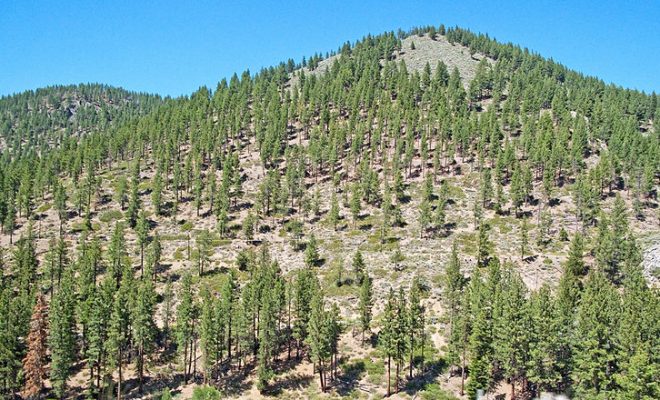 Humanity could recapture about two-thirds of the carbon pollution it has poured into the atmosphere by restoring 2.2 billion acres/890 million hectares of forest cover around the world, according to a widely-disputed study of current and potential forestation published last Thursday in the journal Science.

The worldwide assessment “estimates that letting saplings regrow on land where forests have been cleared would increase global forested area by one-third and remove 205 billion tonnes of carbon from the atmosphere,” Vox reports. “That’s two-thirds of the roughly 300 billion tonnes of carbon humans have put up there since the dawn of the Industrial Revolution.”

“The point is that [reforestation is] so much more vastly powerful than anyone ever expected,” said study co-author Thomas Crowther, a professor of environmental systems science at the Swiss Federal Institute of Technology (ETH Zurich). “By far, it’s the top climate change solution in terms of carbon storage potential.”

Not all climate scientists agree with the basic conclusion, and many object to the message that a single “silver bullet” will solve the climate crisis. But the study still reaffirms that “supporting natural systems should be a major component of any climate change mitigation strategy—in addition to deploying clean energy, switching to electric vehicles, and curbing consumption overall,” Vox states.

Reporter Umair Irfan presents a mini-tutorial on how and why forests play such an important role in drawing carbon out of the atmosphere. And he notes the distinction between afforestation—planting new trees where none grew before—and reforesting lands that previously held trees.

“Crowther and his colleagues used global satellite images to assess tree canopies, figuring out where forests are and where they could re-emerge. They found that there are 2.2 billion acres, or 0.9 billion hectares, worth of forest restoration potential,” he explains.

“From there, the scientists calculated the carbon removal potential of the newly-restored forests. They concluded that the new forested areas would soak up an astounding two-thirds of humanity’s emissions in the atmosphere since the 19th century.”

But in the half-week since it appeared, the study has drawn pushback from multiple sources.

“I would take that as a very broad brush, back-of-the-envelope-type potential carbon sink [calculation],” said forest researcher Laura Duncanson, an assistant professor at the University of Maryland. “It’s highlighting the potential of forests, but there’s so much more research to do.”

The story “has resulted in quite a bit of confusion” tweeted [3] Zeke Hausfather, U.S. analyst with Carbon Brief. “They suggest a sequestration potential of 200 [gigatons of carbon], but (incorrectly) suggest it would represent two-thirds of all emissions from human activities so far. This is incorrect.”

On The Conversation, University College London researchers Mark Maslin and Simon Lewis say the calculations fail to account for the carbon already in the soil, or the centuries it can take for a forest to mature. They cite the Intergovernmental Panel on Climate Change (IPCC)’s calculation that restored forests could sequester 57 billion tonnes of carbon—still a considerable amount, but just one-sixth of human emissions since the mid-19th century.

The story also points to the immense challenges confronting the scale of reforestation envisioned in the study.

“Deforestation [4] is still rampant and is accelerating in some parts of the world,” so “rather than building up forests as a resource to offset greenhouse gas emissions, we’re currently losing them, and emitting more carbon in the process,” Vox notes. Moreover, “as average temperatures keep climbing, forests may lose their effectiveness [5] in soaking up emissions, so time is running out.”

In a second study published in the journal Science Advances, a team led by forest ecologist Robin Chazdon, emeritus professor at the University of Connecticut, devised a scoring system for the forest restoration areas that would deliver the greatest net benefits to humanity—from carbon storage, to water purification, to clean air and wildlife habitat.

“They found that tropical rainforests [6]—in countries like Brazil [7], Indonesia [8], India, Colombia, and Madagascar—in particular stood out,” Vox writes. “That’s because these regions are home to a huge amount of biodiversity and play a major role in the planet’s air and water cycle. Without these forests, these regions would see big changes in rainfall patterns, reductions in air quality, and the loss of some of the most unique species in the world.”

All told, the study flagged 250 million acres/101 million hectares of “restoration hot spots”, and “every part of the world has regions that would yield huge dividends from reforestation,” the story notes.

“Our sense is that these really good bets for restoration are found all over the world, and many countries can participate in these activities,” Chazdon told Irfan. “We did find some concentrations of these highest scores were distributed all over the tropics,” with countries like Rwanda [9], Burundi, and Uganda coming back with the highest scores.

But translating research into action may be a challenge.

“Many of these hot spots are already being used in other ways, like for farming and livestock grazing,” Vox notes. “Local demand for materials, land, and agriculture is often why these forests were cleared in the first place. That means a restoration program in these regions has to show that it delivers benefits that exceed the current uses of the land.”

And that may mean more than arguing the carbon sequestration potential, “particularly since most countries don’t have a mechanism that rewards taking in carbon dioxide emissions”.

Chazdon said even the wider benefits of forest restoration can be hard to quantify. That means a “purely monetary calculation can backfire if the value of cutting down the forest suddenly increases,” Vox states. Moreover, “many people who live on cleared forests subsist on their farming, so they need to be compensated and given alternative livelihoods if that land is going to be repurposed. So the biggest hurdle may be coming up with an economic system that benefits the environment while protecting the most vulnerable.”

“To really make this work economically kind of requires a frame shift in the way we generate economies,” Chazdon said. “The business as usual approach is what got us into this problem, so to get out, it is going to require some innovative mechanisms.”