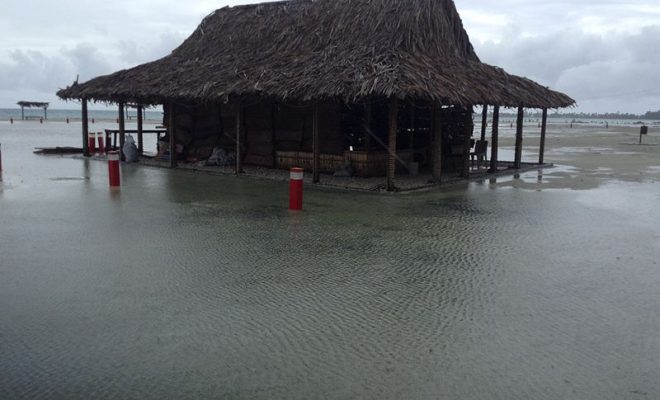 A landmark report on 1.5°C pathways was forever dropped from formal consideration in United Nations climate negotiations, and Climate Action Network-International scorched countries for their “weak political positions on responding to the climate crisis,” as mid-year negotiations to implement and push beyond the 2015 Paris Agreement wrapped up yesterday in Bonn.

As expected, the landmark 1.5°C report [1] issued last October by the Intergovernmental Panel on Climate Change was officially and permanently set aside, after Saudi Arabia and a small number of oil-producing allies concluded [2] a successful, six-month stonewall against the settled science of climate change.

“The move essentially declares that small islands and low-lying coastal developing states like my home, Belize, are disposable global zones to be sacrificed amid unprecedented climate change,” wrote Lois Young, chair of the Alliance of Small Island States (AOSIS). “This is a crisis that affects our security, and we call on those blocking at the UN to step aside.”

“It shows a small group of large oil and gas-producing countries have deep concerns about the implications of the report for their future revenue, and are coordinating a strategy to try and block these implications to be more widely understood,” said Union of Concerned Scientists Policy Director Alden Meyer.

“But no matter how hard they try, Saudi Arabia can’t put the message back into the bottle. The report is out there,” Meyer added.

The final text adopted by national delegates “expressed ‘appreciation and gratitude’ to the scientific community for the report, which it said ‘reflects the best available science’ and notes ‘the views expressed on how to strengthen scientific knowledge on global warming of 1.5°C’,” but “offers no way forward for the report to be considered further in formal negotiations,” Climate Home News reports [4].

That was after the IPCC’s painstaking work established the difference between 1.5 and 2.0°C average global warming as “a matter of survival for many vulnerable countries, including small island states which pushed for the findings to lead to more ambitious carbon-cutting policies,” Climate Home notes.

That outcome prompted Swiss lead negotiator Franz Perrez to wear a t-shirt declaring that “science is not negotiable” and urge countries to let the IPCC findings inform their policies and “make the right decisions” A diplomat from Costa Rica added that “on climate change, listening to the science is not a choice but a duty. If we are asking the world to change, we also, as representatives, need to be willing to change.”

Meeting chair Paul Watkinson said science remained “at the heart” of the UN climate secretariat’s science stream, and that it is “essential for all our collective and individual activities”.

Climate advocates attending the negotiations as delegates and observers during a week of record heat waves [5] excoriated countries for the paltry results of the session.

“The signals emerging from inside negotiating rooms and outside suggest that countries are ready to cave to the short-term interests of a few powerful polluters,” Climate Action Network-International declared [6]. “They are willing to dismiss the concerns of their citizens who show up in massive numbers at marches, and ignore the large-scale suffering from [climate] impacts and loss and damage to maintain a business-as-usual attitude.”

As for the 1.5°C report, “it is unconscionable that the relevance of climate science is put under the spotlight by Saudi Arabia and some other countries at a time when all governments must be responding to the climate emergency and using the IPCC 1.5°C Report to plan for a zero-carbon future,” CAN-I added. “It is important that more countries defend the IPCC reports and are outspoken in their condemnation of those making a concerted effort to undermine the best available science and the Paris Agreement.”

“2019 has so far been characterized by two trends: people losing their homes and their lives at unimaginable rates thanks to the floods, fires, and famines caused by climate chaos, and governments beholden to fossil fuel interests teaming up to hijack these climate talks and multilateral events like the G20,” said Climate Action Network-Canada Executive Director Catherine Abreu.

“Germany shattered its all-time heat record for June yesterday as Parties sat in air-conditioned rooms debating how to receive the best available science on climate change—proof positive that suppressing climate science won’t make the problem go away,” she added. “Governments of the world listen up: either we confront climate change with you or without you. Act now or become irrelevant.”

“What happened here was an injustice –not only for governments and civil society, but for people around the world who desperately need real climate action.,” said Corporate Accountability Climate Campaign Director Sriram Madhusoodanan. “Trump’s delegation, Australia, and other Global North countries went to new lows to prevent the undue and proven influence of the fossil fuel industry from even being acknowledged—let alone addressed.”

Madhusoodanan added that “this is what corporate capture looks like, and why a conflict of interest policy is so vital for the future of this process.”

“Saudi Arabia, Iran, Russia, and the United States are rogue nations,” declared Christian Aid Global Climate Lead Mohamed Adow. “These four major fossil fuel producers are working together against the interests of the rest of the world and jeopardizing our chances of a safe climate. These countries hardly agree on anything other than undermining climate science,” but “because their short-term economic interests relying on fossil fuels are at risk, this is their last kick back at the rest of the world by suppressing scientific warnings.”

“It’s unconscionable that countries have failed this week to make any meaningful progress to combat the climate emergency,” said Jean Su, energy director at the U.S. Center for Biological Diversity. “As undertaking the clean energy revolution is now technologically and economically viable, the major obstacle to real climate action is the sheer lack of political will.  We urge world leaders to listen to the millions of people in the streets and act with humanity and courage to turn this crisis around.”

“Despite six years of negotiating, the UN process has failed to face the fact that a new funding mechanism is desperately needed to support people to recover from climate disasters,” said Harjeet Singh, global climate lead at ActionAid International. “Some governments are finally waking up to the threat of catastrophic climate change by setting vague, faraway net-zero carbon targets for 2050. But they are forgetting those already struggling to cope with the devastating effects of global warming.”