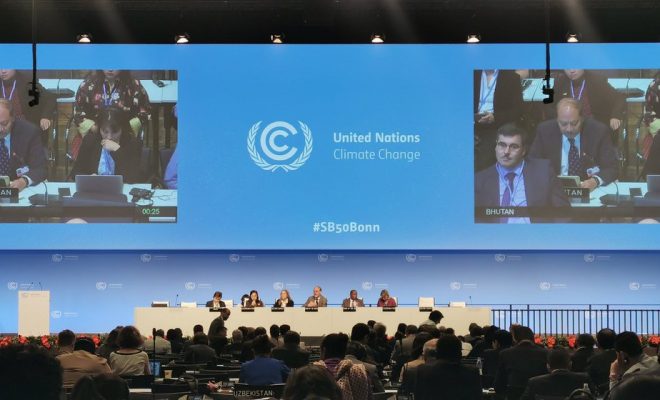 Countries participating in mid-year climate negotiations in Bonn this month are at risk of excluding the IPCC’s landmark report on 1.5°C pathways from their consideration of climate science, with alarmed health professionals calling out Saudi Arabia for its continuing refusal to accept the conclusions in the landmark special report [1] released last fall.

“If no decision is reached in discussions taking place today,” the Global Climate and Health Alliance warned in a news release Monday, “climate agreements will be made without including the latest findings of the world’s preeminent climate scientists and climate and health researchers.”

The Alliance traces the political roadblocks back to last year’s UN climate conference, COP 24, where Saudi Arabia, Russia, Kuwait, and the Trump administration blocked adoption [3] of the IPCC report and prevented the conference from acknowledging its findings. Over the last 10 days in Bonn, Saudi Arabia has renewed and amped up that obstruction, to the dismay and horror of civil society groups monitoring the negotiations.

Earlier in the conference, UK-based Climate Home News reported [4] that an incongruously-tagged “gentlemen’s agreement” among diplomats had countries limiting debate on the conference’s acceptance of the 1.5°C report and undertaking to stop talking about it by mid-last week, whether or not they reached agreement. It essentially meant that anyone inclined to disrupt and disrespect the process, as Saudi Arabia clearly is, could simply wait out the clock.

The net result was that countries may “no longer have a dedicated space to discuss the findings of the report” within the COP process, St. Kitts and Nevis delegate Rueanna Haynes said at the time.

“Haynes, who spoke passionately [5] about the importance of formally recognizing the report at a climate summit in Katowice, Poland last December, said she hoped ‘this approach does not constitute a precedent'” for future scientific findings of the Intergovernmental Panel on Climate Change (IPCC), Climate Home wrote last week.

“If countries are not able to agree on welcoming the report’s findings or doing anything with them, it’s awkward,” said Carl Schleussner, head of climate science at Berlin-based Climate Analytics.

But meanwhile, “the remaining 190+ countries party to the negotiations welcome the report, and many have spoken out to emphasize its importance,” the Global Alliance noted. “Latin American countries, Canada, and the European Union have all praised the report and noted that they are already using its findings. Small Island Developing States, most of which have already experienced significant damage from rising sea levels, are calling for its adoption. Norway, Australia, and Brazil have added their voices to this chorus.”

“Our ability to protect people’s health and to provide health care is at serious risk from climate change,” said Global Alliance Executive Director Jeni Miller. “It is essential that the best scientific evidence be fully embraced by the world’s leaders as they chart a path forward. We urge governments to accept the IPCC report, and make it an official foundation for the implementation of the Paris climate agreement.”